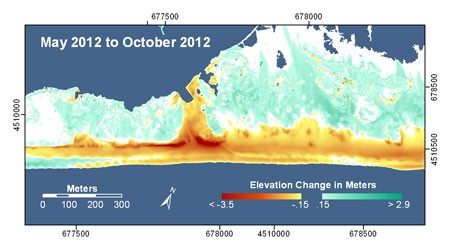 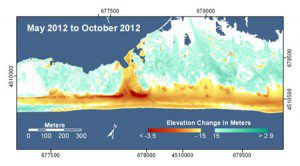 A LiDAR map of Ocean Bay Park, Fire Island, N.Y., reveals extensive erosion that removed sand from a 50-meter-wide swath of the beach and dunes. Overwash from the beach and narrow dunes carried sand inland toward the interior and bayside of the island, and numerous houses were destroyed or severely damaged.

LiDAR uses lasers to measure elevations in a specific distance/area. Researchers used the data, collected during an airborne survey, to construct a high-resolution 3-D map of conditions before and after the storm. This information can help scientists and decision makers identify the areas along the shore that have been made more vulnerable to future coastal hazards in the storm’s wake.

"Coastal dunes are our last line of natural defense from the onslaught of storms and rising seas," said USGS Director Marcia McNutt. "They are dynamic features that retreat from the battering of major storms like Sandy and rebuild in the aftermath; their natural cycle is inconsistent with immobile development."