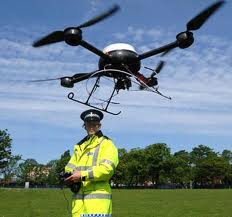 EFF contends the use of drones in American airspace could dramatically increase the physical tracking of citizens.

The Electronic Frontier Foundation (EFF) filed suit on Jan. 10, 12012, against the U.S. Department of Transportation (DOT), demanding data on certifications and authorizations the agency has issued for the operation of unmanned aircraft, also known as drones.

Drones are designed to carry surveillance equipment”including video cameras, infrared cameras and heat sensors, and radar”that can allow for sophisticated and almost constant surveillance. They can also carry weapons. Traditionally, drones have been used almost exclusively by military and security organizations. However, the U.S. Customs and Border Protection uses drones inside the United States to patrol the U.S. borders, and state and local law enforcement are increasingly using unmanned aircraft for investigations into things like cattle rustling, drug dealing and the search for missing persons.

Any drone flying over 400 feet needs a certification or authorization from the Federal Aviation Administration (FAA), which is part of the DOT. But there is currently no information available to the public about who specifically has obtained these authorizations or for what purposes. EFF filed a Freedom of Information Act request in April 2011 for records of unmanned aircraft activities, but the DOT so far has failed to provide the information.

“Drones give the government and other unmanned aircraft operators a powerful new surveillance tool to gather extensive and intrusive data on Americans’ movements and activities,” said EFF Staff Attorney Jennifer Lynch. “As the government begins to make policy decisions about the use of these aircraft, the public needs to know more about how and why these drones are being used to surveil U.S. citizens.”

Dozens of companies and research organizations are working to develop even more sophisticated drones, so their use is poised for a dramatic expansion in the coming years. Meanwhile, news reports indicate that the FAA is studying ways to integrate more drones into the national airspace because of increased demand from federal, state and local governments. EFF’s lawsuit asks for immediate response to the FOIA request, including the release of data on any certificates and authorizations issued for unmanned aircraft flights, expired authorizations and any applications that have been denied.

“The use of drones in American airspace could dramatically increase the physical tracking of citizens”tracking that can reveal deeply personal details about our private lives,” said Lynch. “We’re asking the DOT to follow the law and respond to our FOIA request so we can learn more about who is flying the drones and why.”