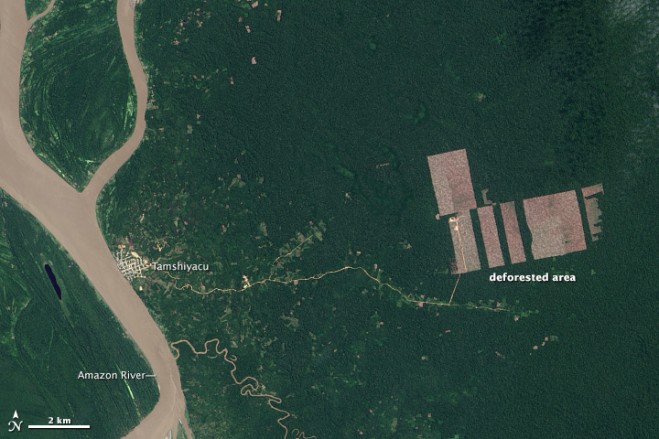 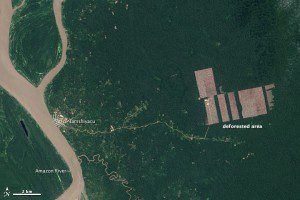 An Aug. 28, 2013, Landsat 8 satellite image shows an area with an estimated 300,000 tons of biomass missing from deforestation.

North Carolina State University researchers piecing together Landsat 7 and 8 satellite images estimate a deforestation rate of roughly 100 hectares (247 acres) per week in a tract they observed.

In July 2013, remote sensing scientist Clinton Jenkins, North Carolina State University, received a tip from colleagues in South America about some possible deforestation in the Loreto region of Peru. Jenkins and colleagues then began combing through recently acquired Landsat images for signs of change. Within hours, they found an image with what appeared to be bare ground in previously intact forest east of Tamshiyacu, Peru. But the image was cloudy. 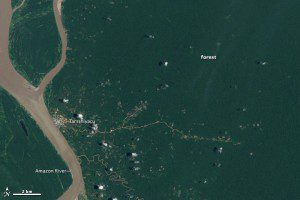 North Carolina State University researchers received a tip from colleagues in South America about some possible deforestation in the Loreto region of Peru, shown in this Oct. 7, 2012, Landsat 7 image.

So the researchers waited. Every eight days, either Landsat 7 or Landsat 8 passed over the region, and every eight days, they got another cloudy image with hints but no confirmation of cleared forest. Finally on Aug. 28, 2013, Landsat 8 got a clear view of the area.

“Landsat imagery is essential for environmental monitoring because it is free, easy to access and quickly available after the satellite passes over an area,” said Jenkins, who has been studying deforestation since he was a graduate student. “Satellites are the only way to monitor these areas because they are so large and so difficult to access.”

By piecing together evidence from multiple Landsat 7 and 8 images, Jenkins and colleagues have estimated that, as of early September 2013, at least 1,000 hectares were cleared near Tamshiyacu. Using a NASA-funded dataset on tropical biomass, he estimated that 300,000 tons of biomass were cut down, equal to 150,000 tons of carbon emitted to the atmosphere. Scientists are continuing to monitor the area by satellite.