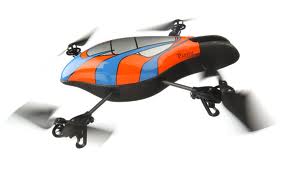 The Parrot AR Drone, which can be purchased for less than $300, includes high-definition video streaming capabilities to a smart phone or a tablet, making it a cost-effective news-gathering tool.

At the University of Nebraska, professor Matt Waite says they’re staying “well within the non-commercial rules” and at the University of Missouri, students are working with the nonprofit National Public Radio station KBIA. Both universities are flying drones under a model aircraft exception in the law that allows hobbyists to fly small aircraft at altitudes below 400 feet.

Professors at both schools are also struggling with how to use drones in a way that will keep them off the radars of groups interested in privacy. In Missouri’s graduate school program (which has about 10 students enrolled), they are “having a hard time figuring out how to integrate [drones],” says Scott Pham, content director at KBIA and co-head of the Missouri program.

“The law has so much grey area, we have to find stories that are not going to involve people,” continues Pham. “The more people are involved, the closer you get to legal and ethical issues. We’re researching the laws, but to be honest, I want to find a way to skirt the issue.”

Pham says his students have a couple of drones in flyable shape, and the team is waiting for the weather to warm up to do its first stories, which could happen in a matter of days. Once people see the potential positive uses of drones, he hopes the public will be a little more likely to accept them.