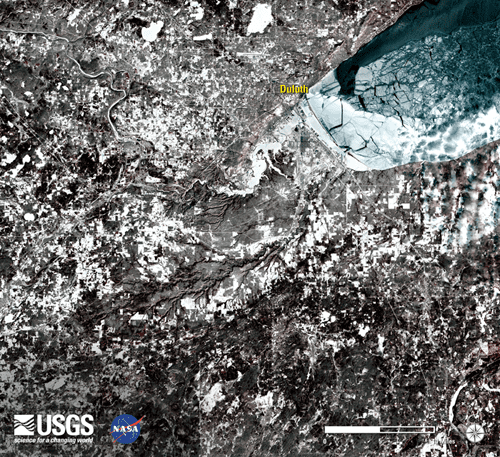 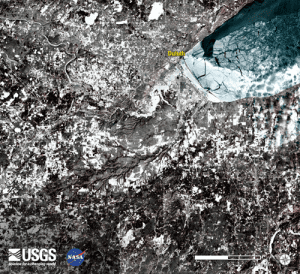 One of the first images acquired by Landsat 5 showed ice breaking up on Lake Superior near Duluth, Minn., on March 6, 1984. For more than a quarter of a century, Landsat 5 has observed our changing planet.

The U.S. Geological Survey announced that Landsat 5 will be decommissioned during the coming months, ending the longest-operating Earth-observing satellite mission in history.

By any measure, the Landsat 5 mission has been an extraordinary success, providing unprecedented contributions to the global record of land change. The U.S. Geological Survey (USGS) has brought the aging satellite back from the brink of failure on several occasions, but the recent failure of a gyroscope has left no option but to announce on Dec. 21, 2012, that it plans to end the mission.

Now in its 29th year of orbiting the planet, Landsat 5 has long outlived its original three-year design life. Developed by NASA and launched in 1984, Landsat 5 has orbited the planet over 150,000 times while transmitting more than 2.5 million images of land surface conditions around the world.

“This is the end of an era for a remarkable satellite, and the fact that it flew for almost three decades is a testament to the NASA engineers and the USGS team who launched it and kept it flying well beyond its expected lifetime,” stated Anne Castle, Department of the Interior Assistant Secretary for Water and Science. “The Landsat program is the ‘gold standard” of satellite observation, providing an invaluable public record of our planet that helps us tackle critical land, water and environmental issues.”

“Any major event since 1984 that left a mark on this Earth larger than a football field was likely recorded by Landsat 5, whether it was a hurricane, a tsunami, a wildfire, deforestation or an oil spill,” said USGS Director Marcia McNutt. “We look forward to a long and productive continuation of the Landsat program, but it is unlikely there will ever be another satellite that matches the outstanding longevity of Landsat 5.”