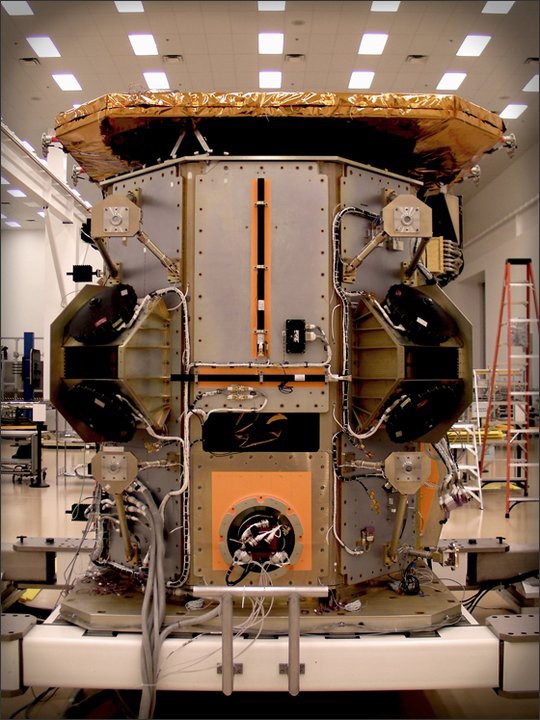 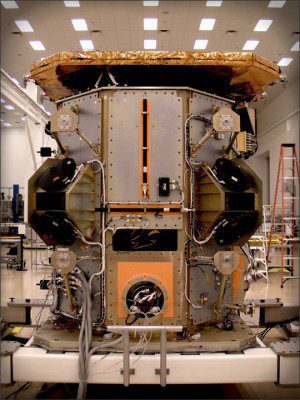 A June 2011 photograph of the LDCM satellite shows the side that will face the sun. The lower orange square at the bottom of the satellite is the attach point for the solar array, which provides the satellite’s power.

A joint NASA and U.S. Geological Survey (USGS) mission, LDCM will add to the longest continuous data record of Earth's surface as viewed from space. LDCM is the eighth satellite in the Landsat series, which began in 1972. The mission will extend more than 40 years of global land observations that are critical in many areas, such as energy and water management, forest monitoring, human and environmental health, urban planning, disaster recovery and agriculture. NASA and USGS jointly manage the Landsat program.

“For decades, Landsat has played an important part in NASA’s mission to advance Earth system science,” said Michael Freilich, director of the Earth Science Division at NASA's headquarters in Washington, D.C. “LDCM promises to extend and expand that capability. USGS’s policy of offering free and open access to the phenomenal 40-year Landsat data record will continue to give the United States and global research community a better understanding of the changes occurring on our planet.”

After launch, LDCM will enter a polar orbit, circling Earth about 14 times daily from an altitude of 438 miles (705 kilometers), returning over each location every 16 days. After launch and the initial checkout phase, USGS will take operational control of the satellite, and LDCM will be renamed Landsat 8. Data will be downlinked to three ground stations in Gilmore Creek, Alaska; Svalbard, Norway; and Sioux Falls, S.D. The data will be archived and distributed at no cost to users from the USGS’s Earth Resources Observation and Science Center in Sioux Falls.