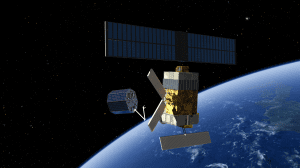 An artist's concept shows how a defunct satellite could be grappled for a controlled re-entry into Earth's atmosphere, where it would burn up and be destroyed harmlessly. This is one of several concepts for clearing dead satellites from orbit being studied by space agencies and industry experts.

There's an urgent need to remove orbiting space debris and to fly satellites in the future without creating new fragments, according to experts at Europe's largest-ever space-debris conference.

Findings from the Sixth European Conference on Space Debris were released April 25, 2013, during the concluding press briefing at the European Space Agency's European Space Operations Centre in Darmstadt, Germany. Future space missions must be sustainable, including safe disposal when they are completed. The current levels mean that we must soon begin removing debris from orbit, with research and development urgently needed for pilot cleaning missions.

The removal of space debris is an environmental problem of global dimensions that must be assessed in an international context, including the United Nations. These results were presented to more than 350 worldwide participants, representing almost all the major national space agencies, industry, governments, academia and research institutes.