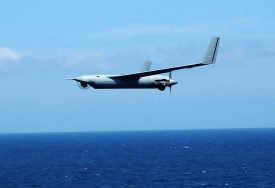 Energy giant ConocoPhillips confirmed that a ScanEagle it uses in the Chukchi Sea experienced an engine failure during a second test flight.

The recent crash of a ConocoPhillips unmanned aircraft system (UAS) in Arctic airspace underscores the fact that flying a UAS can be more complicated than it appears.

The energy company confirmed that an Insitu ScanEagle UAS it uses for airborne surveillance of the Chukchi Sea west of Alaska crashed on a second test flight. The aircraft’s first flight from the research vessel Westward Wind took place on Sept. 12. It lasted 36 minutes and represented the first Federal Aviation Administration (FAA)-approved commercial UAS operation in the U.S. National Airspace System.

Although UASs now are more technologically advanced and theoretically safer than they’ve ever been to operate in congested airspace, more research and tests are needed before they should be allowed to populate the skies, according to unmanned aviation experts. A highly anticipated unmanned aviation boom hangs on future decisions by the FAA. The agency faces a 2015 congressionally mandated deadline to formulate a plan to integrate unmanned aircraft into the national airspace.

Read more about the challenges of flying a UAS.