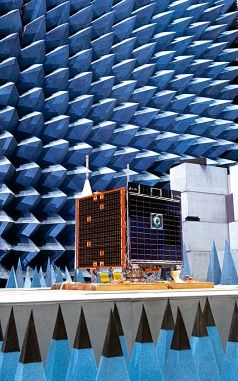 Investments in the United Kingdom, France and Germany are paying off, and an increasingly sophisticated fleet of smallsats is being used for Earth observation, science and military applications.

Next year the European Space Agency (ESA) is preparing to launch its Proba V satellite atop the new Vega light launcher from the European spaceport at Kourou, French Guiana. The 160-kg (352-lb.) microsat is based on the agency’s Proba technology-demonstration platform but is designed to fly an operational payload that will monitor global vegetation growth.

Current vegetation monitoring instruments aboard France’s Spot-4 and Spot-5 satellites have mapped changes in worldwide vegetation to provide data on crop yields, droughts, desertification and deforestation. However, the two satellites are operating well beyond their design life, and no immediate follow-on capability is planned until ESA launches the Sentinel-3 Earth observation satellite in 2014 under the Global Monitoring for Environment and Security program.

To ensure data continuity in the interim, ESA and the Belgian Federal Science Policy Office are investing in a scaled-down version of the Spot vegetation-monitoring instrument that will fly aboard Proba V.

In France, the CNES space agency continues to rely on its lightweight Myriade platform for quick, low-cost science and technology demonstration missions. Weighing less than 200 kg, the Myriade bus was conceived in the mid-1990s as a complement to CNES’s Proteus mini-satellite platform in the 500-kg class.

Developed with EADS-Astrium to serve as the space segment of a turnkey mission system, Myriade comes with a ground system for data acquisition and command-and-control, as well as tools for mission analysis, spacecraft design and system validation.