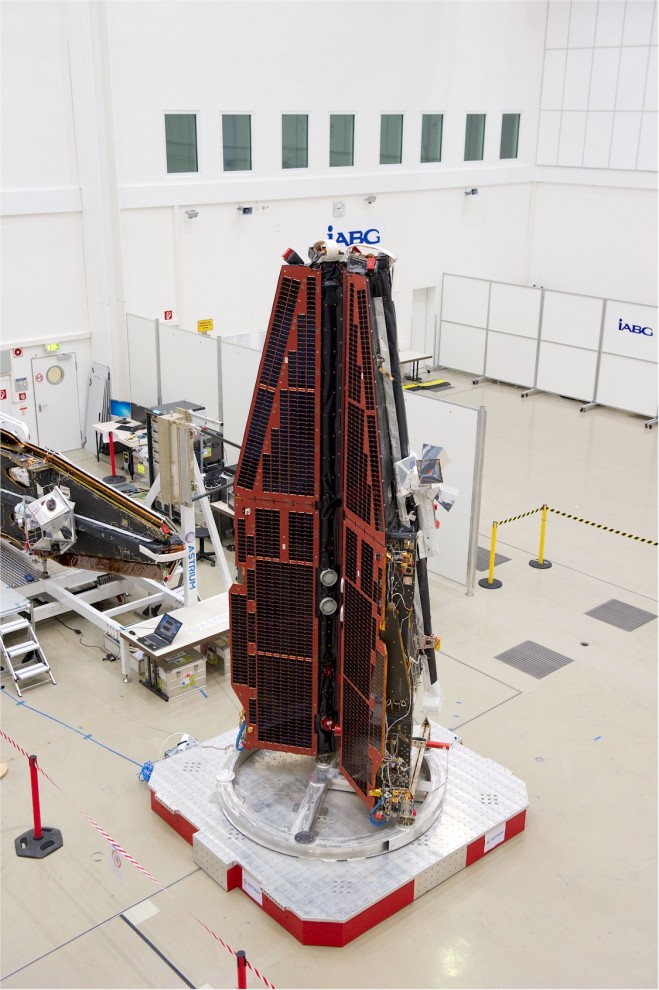 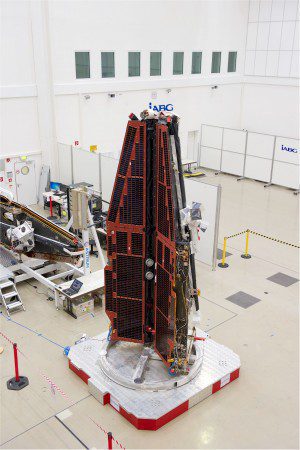 The three satellites that make up ESA’s Swarm magnetic field mission were presented to the media on Feb. 17, 2012, at the IABG Center in Ottobrunn, Germany.

Swarm is the first constellation of Earth observation satellites designed by the European Space Agency (ESA) to measure the magnetic signals from Earth’s core, mantle, crust, oceans, ionosphere and magnetosphere, providing data that will allow scientists to study the complexities of our protective magnetic field.

The magnetic shield protects the planet from charged particles that stream in as the solar wind. Without this shield, life on Earth would be impossible.

This shield is generated mainly deep inside Earth by an ocean of swirling iron in the liquid outer core. How the magnetic field is created and how it changes over time is complex and not fully understood. This force is constantly changing; at the moment, it shows signs of significant weakening. But with a new generation of sensors, the Swarm constellation will provide greater insight into these natural processes and the “weather” in space.

Swarm will be ESA’s fourth Earth Explorer mission in orbit, following GOCE, SMOS and CryoSat. In five months, the trio of satellites will be launched together on a Rockot launcher from the Plesetsk Cosmodrome in northern Russia. Two will orbit close together at the same altitude—initially at about 460 km—while the third satellite will be in a higher orbit of 530 km.

The different near-polar orbits, along with the various Swarm instruments, improve the sampling in space and time. This helps to distinguish between the effects of different sources of magnetism. At the press event at the IABG centre in Ottobrunn, Germany, where all three satellites have just completed an intensive testing program, representatives from ESA, the industrial team, the scientific investigator team and other experts from the scientific community gave presentations on the satellites and the mission’s scientific objectives.

It was the last chance to see the satellites before they are packed up and shipped to Russia in May.ESA’s director of Earth Observation Programs, Volker Liebig, said, “Swarm is the next mission in our Earth Observation Envelope Program. We expect the innovative Swarm constellation of three satellites orbiting in formation to deliver the best-ever survey of Earth’s magnetic field.

Since 2010, engineers from EADS-Astrium, who lead the consortium building the satellites, have been testing them against the harsh environment of space by exposing each satellite to different temperatures, vibration and shocks. The satellites and instruments have their own magnetic properties and therefore influence the measurements they make. The origins of all the magnetic signals stemming from different parts of the satellites were accounted for so that the measurements taken in orbit are not misinterpreted.

The tests were carried out in a “magnetically clean” environment at IABG, and the instruments on all three satellites performed well.

“We collected excellent test results, and the team is eager to verify the performances of the constellation in orbit to confirm the promises from the ground test campaigns.”