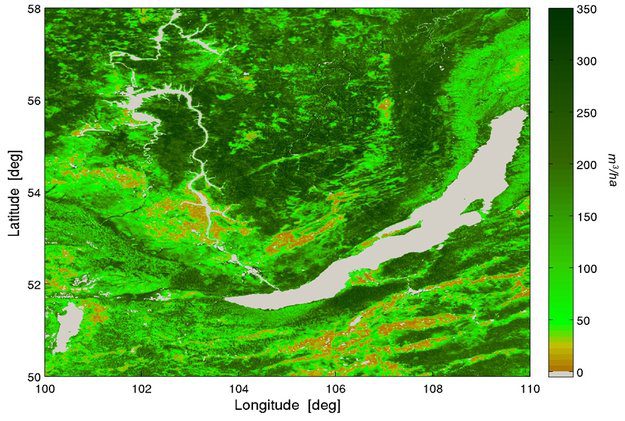 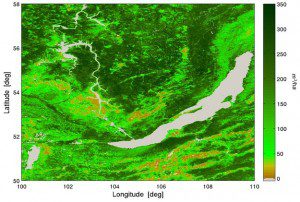 In this pan-boreal biomass map near Lake Baikal, Russia, dark green represents areas of high stock volume, while brown areas have low. White areas, such as the lake and nearby river, have none.

Satellites have mapped the biomass of the northern hemisphere’s forests with greater precision than ever, improving our ability to predict Earth’s climate and understand its carbon cycle.

Accurately measuring forest biomass and how it varies are key elements for taking stock of forests and vegetation. Because forests assist in removing carbon dioxide from the atmosphere, mapping forest biomass is also important for understanding the global carbon cycle.

In particular, northern forests—including forest soil—store a third more carbon stocks per hectare as tropical forests, making them one of the most significant carbon stores in the world. The boreal forest ecosystem, exclusive to the northern hemisphere, spans Russia, northern Europe, Canada and Alaska, with interrelated habitats of forests, lakes, wetlands, rivers and tundra.

With processing software drawing in stacks of radar images from the European Space Agency’s Envisat satellite, scientists have created a map of the whole northern hemisphere’s forest biomass in higher resolution than ever before—each pixel represents 1 kilometer on the ground.

“Single Envisat radar images taken at a wavelength of approximately 5 centimeters cannot provide the sensitivity needed to map the composition of forests with high density,” said Maurizio Santoro from Gamma Remote Sensing. “Combining a large number of radar datasets, however, yields a greater sensitivity and gives a more accurate information on what’s below the forest canopy.”

About 70 000 Envisat radar images from October 2009 to February 2011 were fed into this new, “hyper-temporal” approach to create the pan-boreal map for 2010. This is the first radar-derived output on biomass for the whole northern zone using a single approach and is just one of the products from the European Space Agency’s Biomasar-II project.