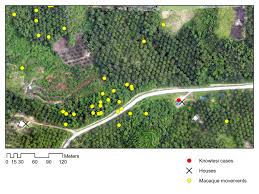 A map illustrates the location of macaques (yellow dots) and human cases of malaria (red dots).

Scientists from the London School of Hygiene and Tropical Medicine have been testing unmanned aircraft system technology to help track the spread of malaria in Southeast Asia.

Using a senseFly eBee drone in cooperation with Conservation Drones, the research began in December 2013 when malaria infections surged near Southeast Asian cities. The eBee drone gathers images of landscape change, which is then correlated to the spread of known cases. In addition to aerial surveys, researchers have added Global Positioning System collars to macaque monkeys that harbor the parasite and pass it along to mosquitoes that then infect humans.

“Drones can provide highly accurate information on changes to land, such as deforestation or changing types of agriculture,” said lead author Kimberly Fornace, research fellow at the school and a member of the Monkeybar project team. ”This helps to understand the impact on the movement and distribution of people, animals and insects that carry disease.”

The Monkeybar project is a multidisciplinary, collaborative research project on a specific form of zoonotic malaria known as Plasmodium knowlesi that is found in macaque monkeys and increasingly infecting people. The research is funded by a five-year grant from the U.K. Research Councils (2012-2017).

A research paper appears in Trends in Parasitology (subscription required).