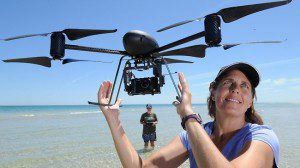 “What we are trying to find out is if we can have a solid scientific foundation for making policy decisions about marine life and the impact people have on marine life,” she said.

“Marine debris is known to affect more than 270 species of marine animals worldwide, from the top predators in the food chain to plankton, but the full extent of the impact is unknown.

“For example, it might be something as simple as `does putting a litter bin at the bottom of stairs to the beach have a big impact on how much rubbish we are recording at a site?’Â ”

The most common sources of the rubbish are beachgoers, landfill, waste disposal activities, storm sewers, commercial and recreational vessels, industrial and agricultural activities. Dr. Hardesty said surveys started at Cape Tribulation late last year and were being conducted every 100 kilometers, including detailed counts of litter on beaches or rocky shorelines.

The project is expected to take one year and will be officially launched in Perth on March 8.

“I believe that there is no beach anywhere in the world that does not have at least some human-made litter,” Dr Hardesty said.

The Teachwild National Marine Debris Project is funded by Shell, Earthwatch and CSIRO.

So far the team has found numerous sea bird carcasses as well as a turtle carcass in Queensland and a penguin near Geelong.