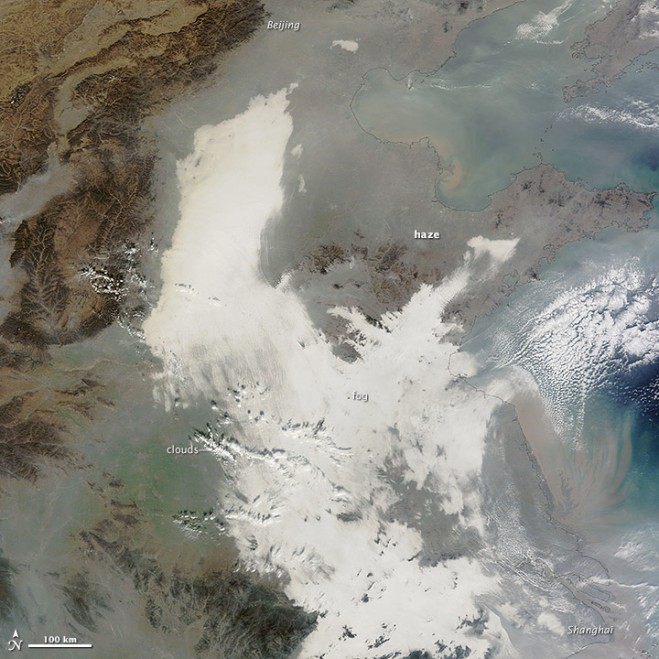 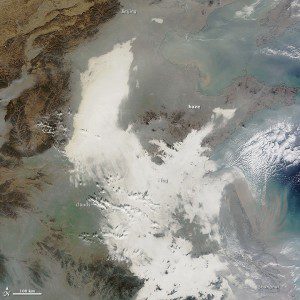 On the day this natural-color image was acquired by NASA’s Terra satellite, ground-based sensors at U.S. embassies in Beijing and Shanghai reported PM2.5 measurements as high as 480 and 355 micrograms per cubic meter of air respectively. The World Health Organization considers PM2.5 levels to be safe when they are below 25.

China suffered another severe bout of air pollution in December 2013. Thick haze stretched from Beijing to Shanghai, a distance of about 1,200 kilometers (750 miles).

For comparison, that is about the distance between Boston and Raleigh, N.C. The brightest areas are clouds or fog. Polluted air appears gray. Although northeastern China often faces outbreaks of extreme smog, it is less common for pollution to spread so far south.

“The fog has a smooth surface on the top, which distinguishes it from mid- and high-level clouds that are more textured and have distinct shadows on their edge,” explained Rudolf Husar, director of the Center for Air Pollution Impact and Trend Analysis at Washington University. “If there is a significant haze layer on top of the fog, it appears brownish. In this case, most of the fog over eastern China is free of elevated haze, and most of the pollution is trapped in the shallow winter boundary layer of a few hundred meters.”

Fine, airborne particulate matter (PM) smaller than 2.5 microns (about one-thirtieth the width of a human hair) is considered dangerous because it is small enough to enter the passages of the human lungs. Most PM2.5 aerosol particles come from the burning of fossil fuels and biomass, such as wood fires and agriculture.