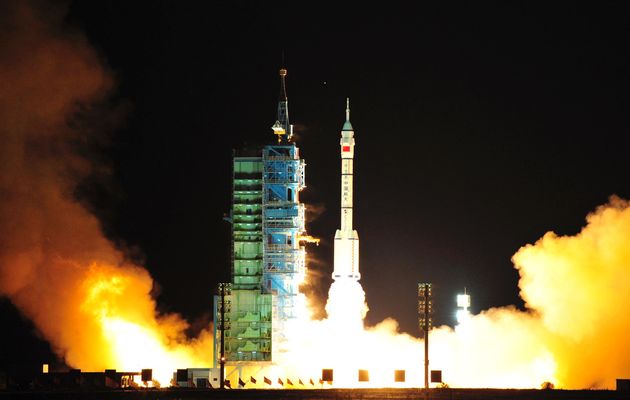 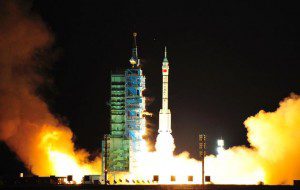 A modified model of the Long March CZ-2F rocket carrying the unmanned spacecraft Shenzhou 8 blasts off from the launch pad at China’s Jiuquan Satellite Launch Centre.

China laid out its five-year plan for space exploration last week, including ambitious plans for increased Earth observation capabilities. Isabelle Sourbes-Verger, a space expert at France’s National Centre for Scientific Research, said it was widely acknowledged that “what matters to China is the role it will play as a major power.”

China marked a key success in November last year when it completed its first docking in orbit high above Earth, a crucial step toward fulfilling its ambition to set up a manned space station by 2020. In 2003, it became the third country in the world to send humans into space after Russia and the United States, and it is now looking into sending astronauts to the moon, although nothing has been set in stone.

The white paper issued onJan. 5, 2012—the third to have been published since 2000—said China “will conduct studies on the preliminary plan for a human lunar landing.”

Australia-based expert Morris Jones said the logo of the China Lunar Exploration Program, which operates robotic missions to the moon, had a human footprint at its centre, providing a “useful clue about their long-term plans.”

But Beijing is not content with playing catch-up on manned flights, and is also looking to reap economic and scientific benefits from space. By 2016, China will “increase the use of satellites to contribute to the development of strategic industries and satisfy the needs of the economy” in telecommunications, Earth observation or global positioning systems, according to the white paper.

China last year launched its version of the U.S. Global Positioning System (GPS), the Beidou satellite navigation system. Further satellites will enable the new system to cover Asia this year, and the whole world by 2020. Sourbes-Verger said China’s ambitions in Earth observation—an expertise that has both civilian and military applications—were well ahead of anything currently planned by Europe.

The white paper outlined ambitions for “24-hour continuous, high-resolution surveillance of the Earth,” she said, adding that the plan, if realized, would put China almost on a level with the United States in this field.

China has long maintained the rapid development of its space capabilities is peaceful in nature, and the white paper reiterated this, saying Beijing “opposes weaponization or any arms race in outer space.” But concerns remain over China’s intentions. In 2009, air force commander General Xu Qiliang caused a stir when he said armed forces should prepare for the “inevitable” militarisation of outer space—a claim hastily disavowed by President Hu Jintao.

Jones noted that China had tested anti-satellite weapons by blowing up one of its own in 2007. “No nation that has a respectable major space program has an entirely peaceful program,” he said.

“The world over, space technologies are used for military communications and to deploy spy satellites. China’s no different.”

The white paper also outlined plans to equip China’s next-generation rockets with the ability to carry heavier cargoes. The Long March-5 rocket being developed will be able to place 25-ton payloads into near-Earth orbit—more than the 20 tons Europe’s Ariane 5 rocket can carry.

But the payload is still a lot lighter than what Saturn V—a rocket used by the United States from 1967 to 1973 that transported the Apollo missions to the moon—was able to carry.

“Now we need vehicles with a greater capability to send more payloads into space,” Hu Haifeng, designer at the China Aerospace Science and Technology Corporation—a contractor for the Chinese space program—was quoted as saying by the official Global Times.