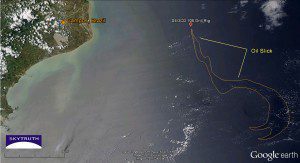 According to SkyTruth analysis of this NASA Aqua satellite image, the oil leak 230 miles northeast of Rio de Janeiro could be as high as 3,700 barrels a day.

An oil spill from a leaking well off the Brazilian coast northeast of Rio de Janeiro “is not over,” the nation’s National Oil Agency warned onNov. 20, 2011.

“The leaking still has not stopped at some points,” the monitoring agency said in a statement, referring to images taken Nov. 19 and data from the Navy “which monitored 400 m (1,312 ft) of cracking” early Nov. 20, according to the G1 news service. The oil “continues to drift away from the coast,” the report added.

Based on an incorrect calculation, the company used a type of material that lacked sufficient weight needed to contain oil, which then leaked and reached the surface, explained the Folha de Sao Paulo newspaper.

Buck had insisted the leak was fully contained on Nov. 13, but noted that the incident was still being investigated.

The well, which Chevron said began leaking Nov. 8, is near the Frade field located some 370 kilometers (230 miles) northeast of Rio de Janeiro in an area that is a migratory route for whales and dolphins.

The U.S. oil giant said no oil leaked from the wellhead, and that it was controlling and monitoring the “sheen.”  It estimated that between 200 and 330 barrels of oil have seeped into the sea since Nov. 8. The energy ministry, for its part, said 220 to 230 barrels of oil were seeping into the ocean daily.