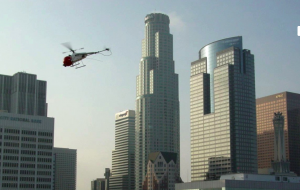 The Flying-Cam SARA helicopter platform can now accommodate a RIEGL VUX-1 LiDAR sensor and is being sold as a package or as a service.

Paris-based Flying-Cam, an Academy Award-winning company that pioneered the use of unmanned aircraft system (UAS) technology for cinematography, recently added 3D light detection and ranging (LiDAR) scanning to its offerings.

Flying-Cam incorporated a RIEGL VUX-1 miniaturized laser airborne scanner onto its platform. The offering was the subject of recent presentations at RIEGL's LiDAR conference and AUVSI's Unmanned Systems conference.

The company credits its high-stakes Hollywood work for innovations in safety and ease of operation. The company's SARA helicopter UAS is a single-rotor aircraft now in its third generation. The company has credits for the Harry Potter, Mission Impossible, James Bond and Transformers films.