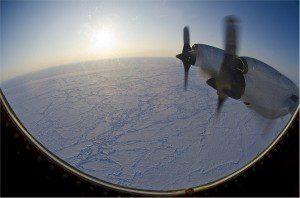 A view of Arctic sea ice was captured from NASA’s P-3 aircraft as it joins ESA to validate measurements of the ice taken from space by the CryoSat satellite. On April 2, 2012, ESA and NASA planes flew together across the Arctic Ocean, directly under CryoSat orbiting 700 km above.

Marking another remarkable collaborative effort, European Space Agency (ESA) and NASA representatives met over the Arctic Ocean recently to perform some carefully coordinated flights directly under CryoSat orbiting above. The data gathered help ensure the accuracy ofESA’s ice mission.  The aim of this large-scale campaign was to record sea-ice thickness and conditions of the ice exactly along the line traced byESA’s CryoSat satellite orbiting high above. A range of sensors installed on the different aircraft was used to gather complementary information.

The airborne instruments included simple cameras to get a visual record of the sea ice; laser scanners to clearly map the height of the ice; an ice-thickness sensor called EM-Bird;ESA’s sophisticated radar altimeter called ASIRAS; and NASA’s snow and Ku-band radars, which mimic CryoSat’s measurements but at a higher resolution.