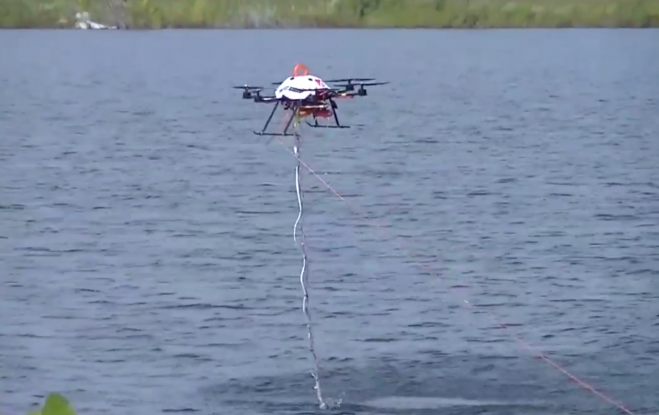 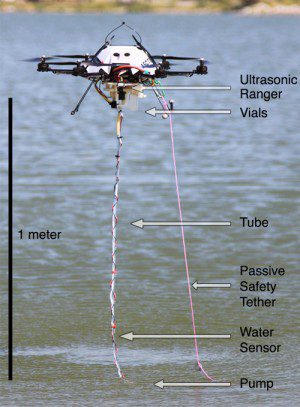 The Co-Aerial Ecologist aims to bring robotics to water sampling with a long tube and pump that extend the reach of scientists.

Researchers are developing an unmanned quadcopter with a tube and a pump they can fly to the middle of a large body of water or other hard-to-reach area to collect samples. The goal is to obtain quick samples over large areas to increase understanding of critical natural resources.

The unmanned aircraft system, dubbed the Co-Aerial Ecologist, is being developed at the Nimbus Lab at the University of Nebraska, Lincoln, alongside researchers at the University of California, Berkeley, with funding in part from a grant from the U.S. Department of Agriculture’s National Robotics Initiative.

According to the researchers:

Monitoring and predicting water quality poses a significant challenge since sources of fresh water and contaminants come in from huge areas of land and waterways. Further, the source of pollution can change quickly during and after rainfall events. Characterizing large-scale and quickly changing water systems remains a critical bottleneck that inhibits understanding of transport processes and the development of effective management plans to address water quality issues.

Another motivation for the robotic sampling method is the inefficiency of the current method of “grab-sampling,” which is expensive, inconvenient and poses safety risks for those who collect the samples. With the robotic platform, the scientists can sample water over a larger area more quickly.

The researchers are working to fine tune their approach with a variety of sensors to record such readings as temperature, salinity and other water quality metrics. The team is also working to integrate the data with existing ground and water sensors.

The ongoing research is also exploring on-board chemical processing so that instead of returning the samples to a lab for testing, the testing can be done onboard with the results cataloged and compared during the visit to the field. This added awareness while the data are being collected, and allowing the scientists to collect multiple samples to test hypotheses or explore the source of contaminants, could bring about breakthroughs.

View this video of autonomous aerial water sampling in action:

Read more about this research here.