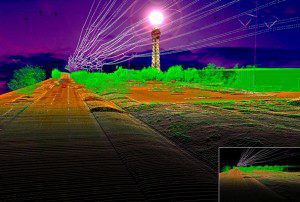 For creating his winning image, Aguayo was awarded an iPad from GeoDigital International and $1,000 to donate to a charity of his choice, which was the Overland High School soccer program, Aurora, Colo.

The awards program held its first competition at the end of 2011. Contestants were required to take airborne Light Detection and Ranging (LiDAR) images and create art from those data. Aguayo's submittal entitled Lighting up the Night consists of five images captured from a testing site in the state of Utah. After reviewing the images, Aguayo's inspiration came from imagining driving on this road under a dramatic night sky, with a light source illuminating his way home. He added birds as a nice touch to creating depth and reality to the image. To keep the visual impact of the image, Aguayo kept the LiDAR points visible.