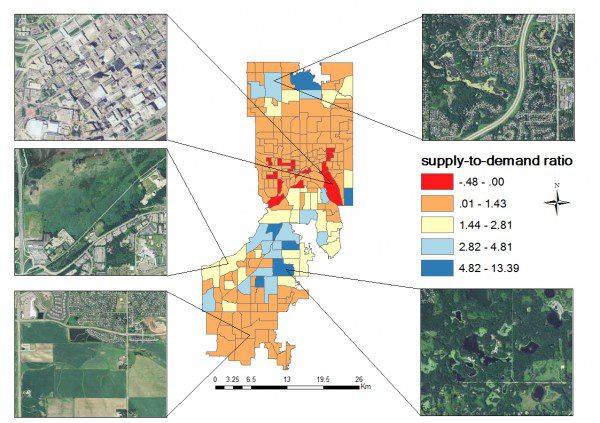 Around the world, from small towns to the biggest cities, civic soldiers in the battle against global warming are striving to cut carbon emissions. One oft-used strategy is to plant more trees, which suck up carbon dioxide, a major greenhouse gas. But does adding more oaks and maples make a dent in urban carbon-reduction goals? How does a city know where trees would be most effective for carbon management?

This analysis may help city planners determine the best locations to focus tree-planting efforts, while helping them realize that the strategy of adding trees needs to be complemented by other reduction and energy-conservation efforts if their communities are to reach their carbon-reduction targets.

“Many cities have outlined goals to reduce carbon-dioxide emissions, and obviously tree-planting is one way to achieve that goal,” said Chang Zhao, a graduate student in the Geographical and Sustainability Sciences department at the UI and corresponding author on the paper, published in the journal PLOS One, “but our study shows it plays a minor role and that we need to focus on reducing carbon emissions over removing them.”

The study looked at Dakota and Ramsey counties, a 331 square-mile area with 359,000 people that includes St. Paul—Minnesota’s capital and second largest city by population—and its southern environs. The researchers calculated carbon emissions per census block—land areas with populations of at least 2,500 people that are used by the U.S. Census. The researchers began by identifying the number of employees in each block working in different employment sectors. They multiplied these numbers by the amount of carbon emitted by each sector based on state data to identify carbon emissions from employment. They also calculated carbon emissions from electrical power generation and added this to the employment-related totals in order to estimate total carbon emissions.

The research team computed the number of trees in each grid using LiDAR, a technology that can isolate trees from buildings, shrubs, elevated roads, and other vertical objects. The team then determined biomass with LiDAR by measuring tree canopy and estimating tree age. These data were compared with field research when possible.

With that information, the researchers were able to detail the amount of carbon generated—which they termed “demand for carbon sequestration”—in each census block and the amount of carbon stored in the trees—the supply—that would be emitted if the trees were removed. The result is a high-resolution, tract-by-tract inventory showing the balance between carbon supply and demand.

“I would say [planting trees] is one strategy that would help with carbon offsets, but we find it’s not going to do it on its own,” says Heather Sander, assistant professor in geographical and sustainability sciences at the UI and the paper’s co-author.

Still, the authors identified “hot spots” in the Twin Cities Metropolitan Area where the carbon imbalance is high, meaning that far more carbon is being released than there are trees to absorb it. In some of these areas, the researchers say, planners could evaluate whether more trees could be planted to create more balance.

While trees on their own won’t get cities to carbon neutrality, they have great merit, the authors stressed. They cool areas by providing shade, they retain soil, remove airborne pollutants, reduce runoff, have recreational and aesthetic value, and store carbon that otherwise would be released, among other benefits to humans.

Sander and Zhao are the study’s authors. There was no outside funding for the research.