January 7, 2015
Researchers Use Lasers to Analyze Aerodynamic Airflow In Flight 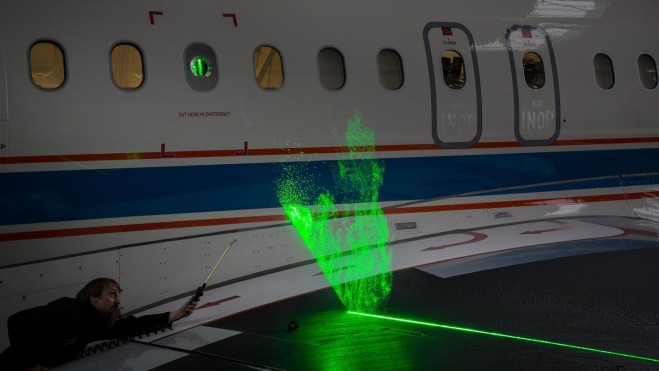 Researchers at the German Aerospace Center (Deutsches Zentrum für Luft- und Raumfahrt; DLR), in collaboration with Airbus, have completed a successful world première – for the first time, they have used lasers to visualise the airflow over the wing of a passenger aircraft in flight. They have developed a method that captures the movement of water droplets streaming over the wing, which reveals the smallest movements of the air. These findings will help optimise future wings to enable slower and quieter approach procedures. Another 'laser flight' is scheduled for  8 January 2015.

Christina Politz and her team at the DLR Institute of Aerodynamics and Flow Technology set off from the research airport in Braunschweig for the first nocturnal test flight on board the DLR A320 ATRA (Advanced Technology Research Aircraft) on 6 January 2015. They were in the air for three and a half hours. The preceding weeks were spent making a large number of modifications to the cabin of the former passenger aircraft, fitting an optically diverged laser behind a special window. "Adjacent to the laser, we installed two high-speed cameras to left and right, behind other cabin windows, pointing the laser and the cameras out onto the wings," Politz explains. "This enabled us to use laser illumination to acquire thousands of images of the reflections from water droplets while in the air."

This was truly a new experience for the DLR test pilots, sitting in the cockpit wearing protective goggles; never before have laser beams been directed across the wing of the ATRA research aircraft: "It really was a special experience for me to sit at the controls during this rather unusual first flight," said Hans-Jürgen Berns from theDLR Flight Experiments Facility. "A challenging undertaking, which I managed quite well."

The researchers are now creating precise 3D animations of the airflow around the wing. "We want to acquire an understanding, in hitherto unachieved precision, of how the airflow behaves around the wings and flaps, and especially around the engine nacelles, during low-speed flight," says Ralf Rudnik from the DLR Institute of Aerodynamics and Flow Technology, who is in charge of the HINVA (High Lift Inflight Validation) project. "Only if we come to a better understanding of the aerodynamic limits during low-speed flight will we have the opportunity to shift these limits to our benefit in the future."

The advantage of this is that commercial aircraft that approach for landing at a lower speed are quieter and can handle shorter runways. Current manufacturer specifications limit the approach speed of passenger aircraft to between 200 and 250 kilometres per hour, with the precise values depending on the type of aircraft and the load. The in-flight test data now being acquired, combined with previous wind tunnel measurements and computational fluid dynamics simulations performed as part of the HINVA project, provide an extensive database. In future, this may permit the development of wings and flap systems that are far better suited to low-speed flight and, in the long term, allow a reduction in the minimum speed restriction around airports. Airbus, as a partner, is supporting the project as part of its own research activities, as the precise predictions of flow processes during take-off and landing that the researchers are seeking will make a substantial contribution to improving future aircraft development.

DLR researchers in Göttingen developed the Particle Image Velocimetry (PIV). This process involves introducing micron-sized particles into a flow field for analysis, and then using high-performance cameras to register their movements in real time. Instead of using synthetic particles, the DLR researchers are now using water droplets naturally available during in-flight testing. The entire flow field can be computed and visualised in three dimensions using specially developed software. Until now, it had not been possible to measure the airflow around an entire wing on a passenger aircraft under in-flight conditions. Previous systems involved the attachment of sensors to the wing surfaces; these come with the disadvantage of interfering with the airflow and are only able to perform measurements at a limited number of positions on the wing. DLR researchers conducted trials of PIV in 2009 and 2013, at that time using the DLR Do 228 research aircraft – a substantially smaller, propeller-driven aircraft.