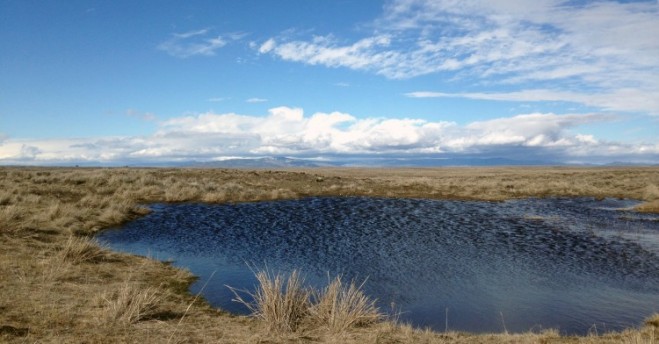 For two University of Washington researchers, the real test came as they walked across a barren-looking field.

They were on the Columbia Plateau with two state wetland ecologists, searching for a 1-acre body of water identified and mapped for the first time using a new method they developed. But when the group arrived at the expected coordinates, map in hand, the soil was dry and cracked and there wasn’t a wetland in sight.

Then, one of the ecologists sunk a shovel into the ground, looked at the characteristics of the soil, and put everyone’s worries to rest: The wetland was there, all right — it just happened to be in a dry phase.

“I remember getting goosebumps when I realized our method worked,” said L. Monika Moskal, an associate professor in the UW’s School of Environmental and Forest Sciences.

This fine-tuned knowledge is the result of a new approach to better understand the hydrology of Eastern Washington’s wetlands. Now, researchers have an abundance of data about how these wetlands behave seasonally, which will also help monitor how they change as the climate warms.

“One of the things that makes wetlands so hard to study is their dynamic nature, the patterns of flooding and drying,” said Meghan Halabisky, a UW doctoral student in environmental and forest sciences and lead author of a new paper appearing in the May edition of Remote Sensing of Environment.

“That element is also the thing that makes wetlands so fascinating and so unique. They have really high levels of biodiversity and unique species you won’t find anywhere else.”

In Washington and elsewhere, wetlands hold water on the landscape and help prevent flooding. They also filter and remove sediment and excess nutrients from entering rivers and larger bodies of water like Puget Sound, and they provide an important water source for grazing animals and migrating species.

Across the U.S. and particularly in Washington state, very little is known about the acreage, yearly flooding cycles and even the actual locations of wetlands. Even hazier is what could happen to these vital ecosystems under climate change.

To get at these questions, Halabisky and collaborators used open-access satellite images (through Landsat, a joint effort by the U.S. Geological Survey and NASA) taken every 16 days from 1984 to 2011 in Washington’s Douglas County. Though these images are shot with impressive regularity and can show changes over time, the resolution is coarse. One Landsat photo pixel is roughly 30 square meters (100 square feet), making it impossible to see wetlands smaller than that size.

They used high-resolution images from the same region to train a computer algorithm to “see” structural elements of wetlands and delineate them from other parts of the landscape. For example, water absorbs light differently than sagebrush or other plants, giving the water in a wetland a unique, identifiable signature.

“Each material has a unique pattern of absorbing and reflecting light. And based on those unique patterns, we can deconstruct each Landsat pixel and find out how much water, sage steppe and other vegetation is composed within that pixel,” Halabisky said.

The researchers applied this method to satellite images taken on about 200 dates over the same areas on the landscape, producing flooding and drying patterns (called hydrographs) for 750 wetlands in Eastern Washington.

“This method is unique because it’s essentially taking the pulse of the landscape — the time-series data (graphs) look like a heartbeat as the water in wetlands fills up, then goes down. We can track this for decades now,” said Moskal, senior author on the paper and director of the UW’s Remote Sensing and Geospatial Analysis Laboratory.

They also are able to identify wetlands, particularly small ones, that weren’t previously on the radar of land managers and other stakeholders who use the semi-arid landscape in Douglas County. The wetlands in this region are an important resource for cattle ranchers, tribes and organizations like Ducks Unlimited.

Researchers with the UW’s Climate Impacts Group will use these data in their models to make projections on how individual wetlands in Eastern Washington could behave under climate change. Halabisky, who has worked in the region for years and revisited a number of the same sites, is sometimes surprised by what she sees.

“I think there’s an assumption that wetlands in arid regions are just going to dry out. In two of my study areas that wasn’t the case at all,” she said. “That may change under climate change when we do that modeling.”

Halabisky is leading an effort in Douglas County to convene land managers and stakeholders in planning for the future of wetlands as the climate warms. Their first workshop in early March drew upon the new seasonal data available for each wetland in the region.

Little is known about wetlands in Western Washington as well, and the researchers hope to use other remote-sensing techniques such as Lidar to characterize their locations and seasonal patterns. Shadows from tree cover west of the Cascades make it hard to use the method described in this paper.

Other co-authors are Alan Gillespie of the UW’s Earth and space sciences department and Michael Hannam of the Smithsonian Environmental Research Center in Maryland. Hannam is a recent graduate of UW who worked with Moskal and Kern Ewing, a professor of environmental and forest sciences.

This research was funded by the U.S. Geological Survey, the U.S. Department of the Interior’s Northwest Climate Science Center and the UW’s Precision Forestry Cooperative.