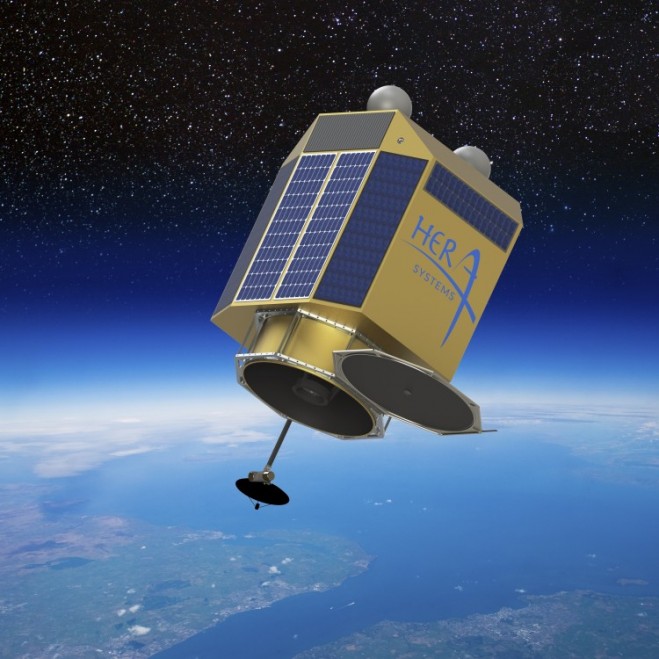 SAN JOSE, Calif.—NASA’s Ames Research Center and Hera Systems have announced that they have executed a licensing agreement on two pending patents for the Cost Optimized Test of Spacecraft Avionics and Technologies (COTSAT) spacecraft. The agreement enables Hera Systems, a satellite information and analytics company, to leverage NASA’s cutting-edge technology in the development of an ultra-high resolution commercial imaging system that Hera Systems anticipates launching in 2017. The news comes on the heels of Hera Systems’ November 19 announcement revealing plans for the launch of a one-meter resolution imaging satellite constellation in late 2016.

COTSAT is a rapid-prototype, low-cost spacecraft for science experiments and technology demonstration. The spacecraft platform is designed to accommodate low-cost access to space for variable remote sensing payloads, while maintaining an architecture that allows for expansion of advanced imaging systems. COTSAT is the result of a six-year NASA program intended to assess the use of commercial, off-the-shelf components to radically reduce the cost of satellite program deployment.

The license arrangement with NASA Ames allows Hera Systems unlimited access to the COTSAT source code associated with two pending patents: the modular spacecraft software architecture and the low-burden star tracker. With this unlimited access, Hera Systems is already leveraging COTSAT technology, research and components as it develops a sophisticated imaging system that will allow the collection of sub-meter resolution imagery of the Earth.

Resulting from a long-standing relationship with NASA, “Acquisition of NASA’s COTSAT intellectual property allows us to fast-track the development of our next-generation spacecraft,” said Bobby Machinski, CEO of Hera Systems. “We anticipate saving millions of dollars in development costs, and reducing the launch schedule by up to 18 months,” he added.

According to Machinski, the star tracker’s ultra-fine pointing knowledge and jitter control system are essential to supporting Hera Systems’ plans to launch an advanced constellation of high-performing spacecraft. “These are remarkable capabilities, and crucial for precision communication systems and sub-meter resolution imaging,” he said.

Hera Systems is planning to demonstrate the new system – featuring many of the COTSAT-based technologies – in 2017. With a plan to simultaneously test three advanced payloads, Machinski said, “We will demonstrate that it is possible to achieve a highly reliable, accurate and affordable spacecraft within a very compressed schedule.”

About Hera Systems
Hera Systems is a satellite information and analytics company that collects images of the Earth every day, enabling commercial and government organizations to monitor change and make smart decisions in near-real time. The company is the only single source of fresh, up-to-the minute, universally accessible, affordable, high-resolution information about any location on the globe. Hera Systems’ initial satellite constellation will enable customers to acquire imagery and video, as well as intelligent analytics and derived information, on demand through a simplified user interface. Future generation systems will feature higher resolution imaging capabilities and other advanced technologies. For more information, visit www.herasys.com.