December 18, 2015 — The pace of deploying Europe’s own satellite navigation system continued to increase with today’s launch of the latest pair of Galileo satellites, doubling the number of satellites in space within nine months.Galileo 11 and 12 lifted off together at 11:51 GMT (12:51 CET, 08:51 local time) atop a Soyuz rocket from French Guiana.

This sixth Galileo launch was a textbook operation: all Soyuz stages performed as planned, culminating in the Fregat upper stage deploying the twin satellites into orbit close to 23 500 km altitude, around 3 hours and 48 minutes after liftoff.

“With today’s launch, Europe has doubled the number of its Galileo satellites in orbit in just nine months,” commented Jan Woerner, Director General of ESA. 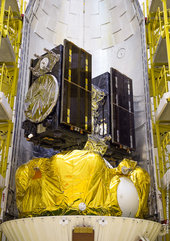 “Along with the ground stations put in place around the globe, this brings Galileo’s completion within reach. Initial Galileo services are scheduled to begin within next year, which proves the importance of this wise investment.”

“The excellent performance of these satellites, as measured on the ground, allows Europe to join the club of the worldwide providers of satellite navigation services,” noted Didier Faivre, ESA’s Director of Galileo and Navigation-related Activities.

“Production, testing and launch of the remaining satellites are now proceeding on a steady basis according to plan.

“Then, after the summer break in 2016, the tempo of deployment will increase further with the first of three customised Ariane 5 launchers that will carry four rather than two satellites into orbit each time.”

This month will see the 10th anniversary of the launch of Europe’s very first navigation satellite: GIOVE-A, on 28 December 2005. It secured the frequencies set aside for Galileo, gathered data on the medium-altitude orbit environment and flight-tested hardware for the working system.

Galileo is the EU’s own global satellite navigation system, consisting of 30 satellites and their ground infrastructure.

The definition, development and In-Orbit Validation phases were carried out by ESA, and co-funded by ESA and the European Commission. This phase created a miniconstellation of four satellites and a reduced ground segment set-up to validate the overall concept.

The Full Operational Capability phase is fully funded by the European Commission. The Commission and ESA have signed a delegation agreement by which ESA acts as design and procurement agent on behalf of the Commission.

Learn more about Galileo at: