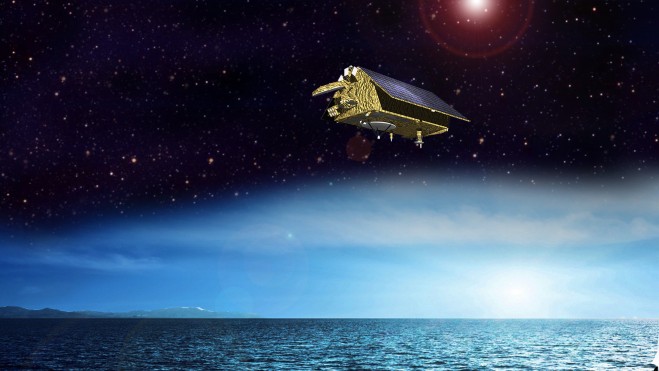 May 11, 2015—At the 36th International Symposium on Remote Sensing of Environment in Berlin, the European Space Agency (ESA) and Airbus Defence and Space, the world’s second largest space company, signed the development and production contract for the Jason-CS/Sentinel-6A satellite. Jason-CS/Sentinel-6 is a mission to carry out high-precision measurements of ocean surface topography. The contract is worth 177 million euros. The implementation of the second satellite will follow the approval of the programme by the Council of EUMETSAT, the European meteorological organisation, in June 2015 and it is co-funded by EUMETSAT and by the European Union via the Copernicus programme.

The satellites will measure their distance to the oceans’ surfaces with an accuracy of a few centimetres and use this data to map it globally, repeating the cycle every 10 days. Observing changes in sea-surface height using such a high level of precision provides insights into global sea levels, the speed and direction of ocean currents, and ocean heat storage. The measurements made are vital for modelling the oceans and predicting rises in sea levels. This data will also be used increasingly for weather forecasts and storm surge warnings.

The Sentinel-6 mission is part of Copernicus, the European Earth observationprogramme, and is a continuation of the programme started in 1992 to collect satellite-based measurements of the oceans’ surfaces. Weighing around 1.3 tonnes, the Jason-CS/Sentinel-6 satellites will ensure that measurements are carried out on a continuous basis from the years 2020 and 2026 respectively, at an altitude of around 1,350 kilometres. Operations for the missions, each running for five and a half years, will be overseen and managed by EUMETSAT in Darmstadt, Germany. Development of the satellites will be based on the highly successful CryoSat programme.

“The Jason-CS/Sentinel-6 programme underscores Airbus Defence and Space’s outstanding expertise in the field of Earth observation satellites,” said Dr. Michael Menking, Head of Earth Observation, Navigation and Science at Space Systems, after the signature of the contract. “Reliable, high-performance satellites gather data about our ecosystem in a precise and sustainable way, providing politicians, scientists and other users with an important diagnostic and decision-making tool.

“As the leader of five of the seven Copernicus missions, Airbus Defence and Space is the key industrial partner par excellence for satellite-based monitoring of the environment,” he said.

As with CryoSat, Airbus Defence and Space in Friedrichshafen will be the prime contractor for the space segment and lead the industry consortium on behalf of ESA. Thales AleniaSpace France will construct the main instrument, a radar altimeter, whose predecessor is already being used on CryoSat-2, Jason-3 and Sentinel-3. Further instruments are being developed by NASA/JPL in the USA. The American National Oceanic and Atmospheric Administration (NOAA) is also a partner of Sentinel-6/Jason-CS.