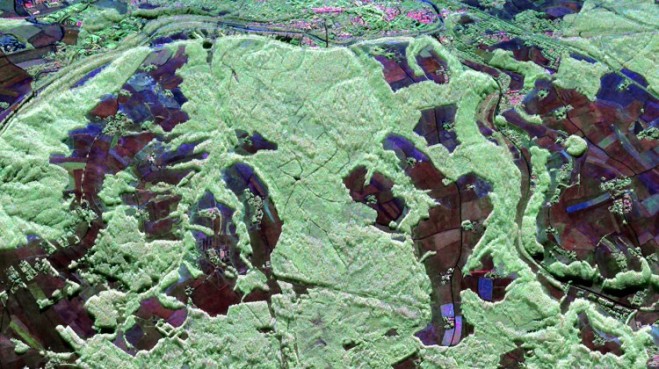 July 15, 2015—A tangle of treetops and branches, through which just the occasional clear area provides glimpses of the trunks and roots growing below. Whether it is woodland with German spruces or a tropical rainforest, very few sensors are able to see through this green carpet and clearly visualise the underlying structures. The German Aerospace Center (Deutsches Zentrum für Luft- und Raumfahrt; DLR) is developing radar technology that, for the first time, will enable a three-dimensional visual representation of forest areas from the roots to the crowns. The radar experts at DLR partnered with the US aerospace agency NASA in a measurement campaign, which has now confirmed the capability of the F-SAR system. The cooperation was aimed at validating the suitability of the radar data to infer a variety of parameters, including a forest’s height or vertical structure.

"The collaboration with NASA allowed us to really test both the sensor technology and the algorithms. We could not have hoped for better results," said Andreas Reigber, project coordinator at the DLR Microwaves and Radar Institute.

To conduct a cross comparison of the data, NASA and DLR each used different sensor systems while imaging the same area. The measurement flights took place over a test region near Traunstein, in southeastern Bavaria. NASA's Jet Propulsion Laboratory deployed its UAVSAR sensor on board a NASA Gulfstream III research aircraft. All the data of the partners from Pasadena was recorded within two days. Roughly a week later, the conditions and weather were sufficiently similar for the DLR team from the Microwaves and Radar Institute to take to the air for its own measurement campaign. Reigber and his colleagues flew over the test area 10 times in quick succession, using the DLR Dornier Do-228 research aircraft, and mapping the forest from a variety of angles. This is the only way in which the individual data acquisitions can be assembled to produce a three-dimensional image later on.

The F-SAR system developed by the DLR Microwaves and Radar Institute is particularly suited for use in forested regions, as it permits simultaneous measurements at several wavelengths. This means that F-SAR only needs one overflight to map different levels of the same terrain. Three wavelengths were used for the spatial survey of Traunstein Forest; the DLR researchers used sensors in C-band and X-band to scan the upper sections of the forest crown, while the L-band sensors penetrated the vegetation to open a window on the forest floor below.

The first evaluations of the measurement campaign have since confirmed F-SAR's accuracy. Moreover, the DLR researchers can use the comparative data provided by NASA to achieve even greater precision in the radar system’s calibration. The scientists can use the variations in the images to understand the capabilities of each sensor to detect certain forest characteristics. The scientists will produce the 'end product' – a three-dimensional image of the forest – once data analysis is complete.

Biomass as a climate factor

Environmental and climate researchers are not alone in wishing they could understand the characteristics of a forest with just one measurement – however complex, impenetrable and expansive it may be. A forest's structure also reveals the biomass it contains. As a natural storage mechanism for carbon, biomass directly influences the greenhouse effect. Therefore, radar tomography opens up entirely new and efficient avenues to identify one fundamental climate factor. The DLR scientists are keen to establish 3D radar mapping as a standard operating procedure – and also to install the technology on satellites. This successful measurement campaign, conducted in cooperation with NASA, has now confirmed that radar technology from Oberpfaffenhofen is on precisely the right track, and that this cooperation has been an important step forward in getting ready for future Earth observation missions.

The DLR Microwaves and Radar Institute is currently preparing for Biomass, a European Space Agency (ESA) satellite-based mission that will conduct radar observations of Earth's surface. The main focus of the mission is to determine the volume of biomass in the tropical rain forests. In addition, the Institute is at the forefront ofTandem-L, a highly innovative satellite mission tasked with using radar to record the dynamic processes unfolding on Earth's surface. Together, these projects promise a level of scientific insight one would not necessarily expect from flying over an area of woodland.