Leicestershire, United Kingdom, Oct. 23, 2014”High resolution laser scanned height models may have revealed previously unrecorded First World War practice trenches. The LiDAR (Light Detection and Ranging) data, captured by aerial mapping company Bluesky, was commissioned by the Coal Authority as part of their research and development programme, which is looking at alternative ways to inspect mine entries in remote and rural areas. However on closer inspection by specialists at English Heritage, patterns in the terrain revealed trenches that are thought to have been used by soldiers preparing for the battlefields of World War One.Â 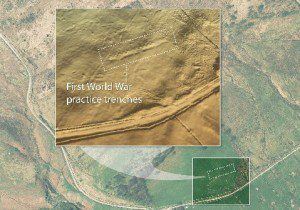 Phil Broughton, Project Manager (Research and Development and Mine Entry Inspections), Coal Authority, said, Our team has inspected 103,000 mine entries in Britain since 2008 under our remit to protect the public and environment in coal mining areas. Most of the remaining mine entries to be inspected are in remote or rural locations, and we're looking at innovative ways to carry these out using new technology.Â

We recently met English Heritage to show them the Bluesky LiDAR data and they identified features believed to be First World War practice trenches. We've now shared this data with them for further investigation.

Simon Crutchley, from the Remote Sensing team at English Heritage added, “As the statutory advisor on the historic environment English Heritage was consulted by the Coal Authority on this project. Whilst conducting analysis on the mining remains I noticed what appeared to be the classic crenelated forms of First World War trenches to the east of the mining. Further examination revealed what appears to be the extensive and unrecorded remains of First World War practice trenches which could help tell the story of Derbyshire’s soldiers as they prepared to go to war.”

Rachel Tidmarsh, Managing Director of Leicestershire based Bluesky, said, LiDAR is a valuable tool as it reveals subtle nuances in the landscape that simply cannot be seen from the ground or identified from other sources. This is not the first time users of our high resolution LiDAR have been surprised by what they can see!

The Coal Authority LiDAR data was captured using Bluesky's state of the art airborne mapping system. The LiDAR (Light Imaging Detection and Ranging) system uses aircraft mounted lasers to accurately determine the distance between the sensor and the ground or other targets such as buildings and vegetation. Bluesky uses an Optech Orion M300, the highest specification instrument being operated from a UK base. This allows for the capture of LiDAR data at a higher point density and at a better accuracy than other systems due and includes the latest available technology in global positioning and inertial measurement for improved sensor positioning accuracy.

The Coal Authority is located at Mansfield, Nottinghamshire. Established under the Coal Industry Act 1994 and sponsored by the Department of Energy and Climate Change the Coal Authority works to protect the public and the environment in mining areas and manage the effects of past mining by: dealing with coal mining subsidence and any emergencies associated with ground collapse; helping to clean up water from mines; dealing with mine gas issues and providing information about coal mining.Â  The Coal Authority also licences companies to mine coal in Britain.

Bluesky is a UK-based specialist in aerial survey including aerial photography, LiDAR and thermal data using the very latest survey technology, including an UltraCam Eagle and an Orion M300 LiDAR system.Â  An internationally recognised leader with projects extending around the globe, Bluesky is proud to work with prestigious organisations such as Google, the BBC and Government Agencies.Â

Bluesky has unrivalled expertise in the creation of seamless, digital aerial photography and maintains national off the shelf coverage of aerial photography, DTM and DSM through an on-going 3 year update programme.Â  By purchasing a World first sensor for the simultaneous capture of LiDAR, Thermal and Aerial Photography data Bluesky is in the enviable position of being able to provide customers with unique and cost effective solutions.