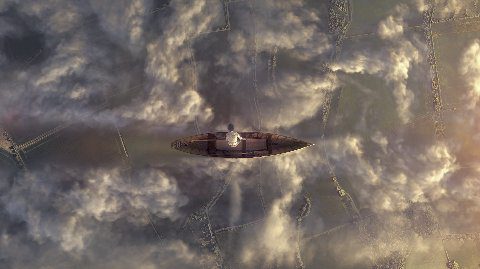 Coalville, Leicestershire, UK, 11 December 2014 – Aerial photography from Bluesky is helping to promote Pink Floyd’s latest album. A sixty second television advert, designed to promote Endless River, the fifteenth and final studio album by the British progressive rock band, features high resolution aerial photography of the River Cam in Cambridgeshire. With excerpts from the album, including the only vocal track ‘Louder Than Words’, and voice over by Sean Bean, the commercial was created by London based Glassworks, a modern post production company supplying high-end digital animation and visual effects expertise.

The original album cover, on which the commercial was based, depicts a young man in an open shirt punting across a sea of clouds towards the sun. Designed by Ahmed Emad Eldin from the concept of his piece ‘Beyond the Sky’ for ‘The Endless River’, Aubrey Powell of Hipgnosis served as creative director for the artwork.

Johnny Fairburn of Glassworks, Producer of the Pink Floyd video commented, “Working with Bluesky to obtain the most appropriate and visually pleasing image has been very easy with someone always on hand to help clarify what we required and what we could do with the imagery.”

James Eddy, Technical Director of aerial mapping company Bluesky and lifelong Pink Floyd fan added, “It is a tremendous honour; Bluesky aerial photography helping to promote the last ever Pink Floyd album. It was also a great pleasure to work with Glassworks to bring their creative ideas to fruition.”