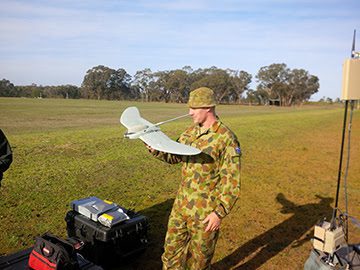 ADF placed an AUD $7.7 million order on Dec. 22, 2014 as part of an Army Soldier Modernization Trial procurement. AeroVironment received the order from XTEK Limited on behalf of the ADF.

Flittie added, “Increasingly, allied forces around the world are deploying our small unmanned aircraft systems for valuable, real-time situational awareness to help them operate more safely and effectively.”  AeroVironment has delivered more than 25,000 new and replacement small unmanned aerial vehicles to customers within the United States and to more than 30 international governments.

The Wasp AE weighs 2.8 pounds, operates for up to 50 minutes at a range of up to five kilometers and delivers live, streaming color and infrared video from its pan-tilt-zoom Mantis i22 AE gimbaled payload.  Launched by hand and capable of landing on the ground or in fresh or salt water, the Wasp AE provides portability and flexibility for infantry, littoral or maritime reconnaissance operations.

RQ-11B Raven, RQ-12 Wasp®, RQ-20A Puma and Shrike VTOL comprise AeroVironment’s Family of Small Unmanned Aircraft Systems. Operating with a  common ground control system (GCS), this Family of Systems provides increased capability to the warfighter that can give ground commanders the option of selecting the appropriate aircraft based on the type of mission to be performed. This increased capability has the potential to provide significant force protection and force multiplication benefits to small tactical units and security personnel.  AeroVironment provides logistics services worldwide to ensure a consistently high level of operational readiness and provides mission services for customers requiring only the information its small UAS produce.  AeroVironment has delivered thousands of new and replacement small unmanned air vehicles to customers within the United States and to more than 30 international governments.

The Puma AE small UAS comprises one component of AeroVironment’s advanced, turnkey data collection, processing and delivery solution employed to provide commercial customers with engineering-quality information, on-demand, across multiple industries such as oil & gas, agriculture, mining and others.  The Qube small UAS is tailored to law enforcement, first response and other public safety missions.  Small enough to fit easily in the trunk of a car, the Qube system can be unpacked, assembled and ready for flight in less than five minutes, giving the operator a rapidly deployable eye in the sky at a fraction of the cost of manned aircraft and large unmanned aircraft.