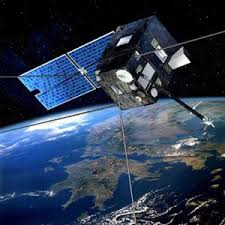 As landslides caused by heavy rain again closed roads across Scotland this autumn an innovative Scottish company has won a prestigious European competition for a satellite monitoring application which could help alleviate the ongoing transport problem.

At an impressive awards ceremony in Berlin, Stevenson Astrosat, one of Scotland’s most ambitious space technology companies, was awarded the Copernicus Masters transport and logistics prize sponsored by technology company Satellite Applications Catapult. The award includes business support worth £10,000.

It is the fifth major award the Edinburgh-based company, which merges satellite and ground-based data to provide valuable information to a wide range of sectors, has won in the three years since it was established.

Steve Lee, founder and CEO of Astrosat – it stands for Astro Science and Technology – said: “This really is recognition by our peers. The Copernicus Masters helps stimulate innovative solutions for business and society based on Earth observation, and this award is a huge tribute to the entire team at Astrosat.”

Astrosat took the accolade for its Transport Sentry application, which uses synthetic aperture radar and optical satellites to examine road and rail links that have previously been identified by the system as potential problem areas and quickly report damage back to a transport infrastructure operator.

Scanning for landslides is particularly important in remote locations such as the Highlands of Scotland, which are badly hit each year by winter weather. Transport Sentry also has significant commercial potential in large countries with low population densities, such as Sweden and Canada.

Astrosat has been a finalist in three other fields this year. It won third place in the UK leg of the European Satellite Navigation Competition for Expedite, a location system for explorers.  It also presented its future city system for the Satellite Applications Catapult, becoming a double finalist and winning one award, and in the Ideas Challenge for its RoofWatch system.

Astrosat, which will have a turnover of £750,000 this year and employs 13 people, has transformed the way space-based information can be used to bring previously unattainable benefits to energy, transport and aquaculture enterprises.

What differentiates Astrosat is that it takes data from both geo-stationary satellites and polar orbiters and merges it with data mined from earth-based resources. It has previously won the Copernicus prize for ThermCERT, a thermal and carbon efficiency reporting tool, which has now been spun off and WaveCERT.

It is using similar data conflations and configurations to trial WaveCERT, which will allow marine renewable energy companies to decide on ideal locations for installation without the need for costly marine surveys.