CryoSat Satellite Goes to Sea The European Space Agency launched CryoSat in 2010 to measure sea-ice thickness in the Arctic, but high-resolution mapping of ocean-floor topography now is being added to the ice mission’s repertoire. The topography of the ocean surface mimics the rises and dips of the ocean floor due to the gravitational pull. Areas of greater mass,

Satellite Heavyweights in Buyout Battle Facing federal budget cuts likely to impact government deals that provide most of their annual revenues, DigitalGlobe and GeoEye each have rejected unsolicited offers to buy one another. OnMay 4, 2012, GeoEye proposed to acquire its U.S. competitor DigitalGlobe. The proposed transaction would have given DigitalGlobe shareholders $17 per share in total consideration, payable

Saudi Crops Flourish in the Desert

In this series of Landsat images, sensors detected light reflecting off Earth in the short wave-infrared, near-infrared and green portions of the electromagnetic spectrum. With this combination of wavelengths, new vegetation appears bright green while dry vegetation or fallow fields appear rust colored. Dry, barren surfaces are pink and yellow. Over the past three decades,

ASPRS Boosts Resolve for Moderate-Resolution Imagery The American Society for Photogrammetry and Remote Sensing (ASPRS) recently issued its third resolution calling for immediate support and funding to continue the U.S. moderate-resolution imaging program. More than 40 years of uninterrupted Landsat imagery has played a critical role in monitoring ongoing stresses on Earth from population, industry, climate change, land use and 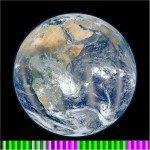 People love images of the full disk of Earth as it would appear from space. NASA science colleague Norman Kuring recently took some fresh data from the agency’s newest Earth observation satellite, projected them onto a disk and voila—3 million people viewed the image in a week! The above image of Earth’s eastern hemisphere was

ASPRS Approves LAS 1.4 Specification The American Society for Photogrammetry and Remote Sensing (ASPRS) board of directors approved LAS 1.4, a new release of the open file format for light detection and ranging (LiDAR) data storage and delivery. ASPRS has been maintaining and updating the widely used specification since its inception in 2001. The most significant of the new

Antarctic Mosaic Comprises More Than 3,000 RADARSAT-2 Images MDA's Information Systems Group released a detailed new image of Antarctica for use in applications such as global climate change, shipping and transportation, exploration and environmental science. The image, developed in coordination with the Canadian Space Agency for the International Polar Year (2007-08), is a unique compilation