How does Santa fly in and out of the world’s troubled hotspots without being detected by early warning and detection systems? Learn about his high-tech secrets!

The European Commission’s GMES Services rely on a wide range of mission-critical satellite data from more than 40 European and international space missions.

Inside the NRO: Too Many Secrets?

The National Reconnaissance Office reported that during polygraphs, it had 366 confessions ranging from crimes to inappropriate personal behavior in fiscal year 2011. However, local law enforcement agencies aren't always told so they can investigate. 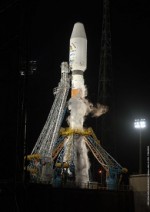 On Dec. 2, 2012, a Soyuz rocket catapulted the Pléiades 1B very high-resolution optical satellite into orbit, where it has joined its twin Pléiades 1A satellite.

After two decades of satellite observations, an international team of experts has produced the most accurate assessment to date of ice losses from Antarctica and Greenland.