After Irene: NOAA Provides a Bird’s Eye View of Damages

The agency is providing imagery and LiDAR data as they become available, allowing the public to get a close look at homes and neighborhoods.

Watch out below—when NASA’s Upper Atmosphere Research Satellite re-enters Earth’s atmosphere either later this month or in early October, not all of it will burn up.

After experiencing two years of drought, things are changing rapidly for villagers living along the Kosi and Ganga rivers in the state of Bihar.

Through September 2011, NASA’s P-3 research aircraft will continue flying from Quebec to Florida to measure the 3-D structure and carbon storage capacity of North American forests.

A Railroad in the Sky?

That’s how James Grimsley, president and CEO of Design Intelligence Inc., describes the initial economic opportunities for unmanned aircraft in the civilian world.

The Department of Homeland Security has awarded the Sheriff’s Office of Montgomery County, Texas, a grant for a squadron of ShadowHawk unmanned aircraft.

On Aug. 24, 2011, a lightning storm started a cluster of wildfires in Oregon’s Cascade Mountains. By Sept. 1, the fires had burned through more than 90,000 acres of forest, grass and brush.

An assortment of images from NASA, NOAA and DigitalGlobe provide examples of the different types of Earth imagery employed to track hurricanes and monitor the damage left behind. 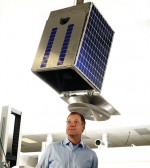