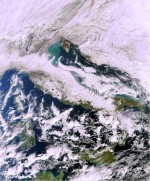 Heavy snow recently has wreaked havoc across Europe, and now the accumulation across Italy shown in this striking satellite image is damaging some historic monuments.

Farmers who claim more European Union subsidies than they should are more likely to be caught by a camera in the sky than by an agriculture inspector with a clipboard.

Satellite image provider DigitalGlobe released images from its WorldView-2 satellite that show Syrian army tanks and other armored vehicles in the city of Homs.

The U.S. Army is using TerraGo geospatial collaboration software to produce, access, update and share geospatial information and applications in support of warfighter efforts around the world.

A record-breaking snowstorm struck Colorado in early February 2012, closing an interstate highway, grounding flights and dropping more than a foot of snow on the Denver area. 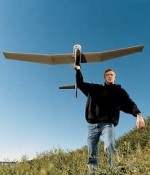 A drone enthusiast testing out his airborne camera discovered a river of blood behind a Texas meat-packing plant, prompting outrage and investigations by local authorities.

The two commercial satellite operators, with a 10-year deal to provide imagery to the U.S. government, face a combined $50 million in lost revenue this year and more in 2013.

In a first for local law enforcement in the region, 16 North Dakota counties will use two small unmanned aircraft to monitor crime scenes and track suspects.