The Asian powerhouse laid out its five-year plan for space exploration last week, outlining ambitious plans that include increased Earth observation capabilities and a trip to the moon.

How Many Kinds of Antarctic Ice Are There?

December’s end marks the beginning of summer along the East Antarctic coast. The sun shines almost constantly, yet ice still dominates the land and sea—the ice, however, is far from uniform.

Using helicopters to survey oil and gas pipelines can cost around $300 an hour, while renting a lightweight unmanned aerial vehicle (UAV) can cost as little as $20 an hour.

The Oregon Office of the Bureau of Land Management is coordinating a major research effort that is investigating the use of LiDAR for natural resource mapping.

The Philippines government has authorized new spending for its DREAM disaster planning and response program, including state-of-the-art LiDAR and InSAR technology.

A dozen trucks leave a site under observation and speed off in different directions—which one do you track? Like the 100-eyed Argus of Greek mythology, this drone can watch them all at once! 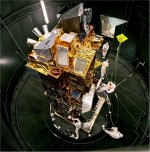 In 1980, an immigrant engineer from Israel named Abraham Karem retreated to his garage near Los Angeles and began building an unmanned aircraft that has evolved into a modern aviation icon.

After the Pléiades 1A satellite returned impressive first images three days into orbit, Astrium says its agility and reactivity are among innovations to expect during the next several months.