The Department of Geography in the College of Earth and Mineral Sciences at The Pennsylvania State University continues to lead academically in geospatial sciences through its Remote Sensing and Earth Observation Program and its Online Geospatial Education Program Office.

The crew aboard the Dagmar Aaen, a research ship traveling around the Antarctic Peninsula to investigate how climate change is impacting the local environment, is receiving high-resolution radar images from the German Aerospace Center (DLR) to help navigate the icy waters.

The U.S. Geospatial Intelligence Foundation (USGIF) is accepting nominations for its 2016 Awards and Scholarship programs.

On Feb. 2, 2016, a robotic arm aboard the International Space Station deployed a pair of satellites built by students at Texas A&M University and the University of Texas. 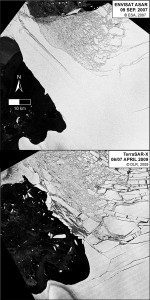 According to a report recently published in Nature Climate Change, satellite data is helping to reveal that there’s a critical point where Antarctica’s huge ice shelves act as a safety band, holding back the ice that flows to the sea.

By Kristine White On February 7, some 115 million football fans will turn on their TVs to watch the golden anniversary of America’s favorite sporting event – the Big Game. In the San Francisco Bay Area, a lucky 70,000 fans will view the event from seats in the new $1.2 billion stadium in Santa Clara. An

Researchers led by Sang-Ho Yun at NASA’s Jet Propulsion Laboratory developed a way to create damage maps from satellite imagery—even if images are taken at night or when skies are cloudy.