GeoEye-2 Design Phase Ahead of Schedule

Record snowfall, killer tornadoes, devastating floods … Since last December, the weather in the United States has been positively wild. But why? A NASA climatologist points a finger at the disappearance of La Niña. 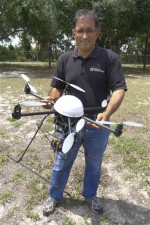 University of Florida researcher Reza Ehsani and others are using a miniature unmanned aircraft system (UAS) to view crops from above, giving farmers a promising, inexpensive way to obtain much-needed clues about what’s really happening between the leaves and branches.

If all goes well, Spain will become the first European country to have a dual Earth observation system—radar and optical—for both civilian and military use.

A group of 27 scientists has joined the 50-person dig team at the Ice Age fossil site near Snowmass Village, Colo. With only a week left in the dig at Ziegler Reservoir, the fossil excavation is accelerating to its completion.

During the last two years the European Space Agency has funded a project that aims to establish a service concept based on satellite Earth observation technologies capable of monitoring carbon dioxide capture and storage facilities.

GEOINT in the Palm of Your Hand

The National Geospatial-Intelligence Agency continues to pursue better ways to make imagery more readily available to the warfighter, including tapping into cloud computing. Which hand-held devices could benefit from this trend?