Huntsville, Ala., May 29, 2013—Atlantic, a mapping company specializing in remote sensing, surveying and consulting services, has opened a third office location just outside of Houston, in Richmond, Texas. “This is a strategic move for Atlantic in an effort to be physically closer to a big economic center for energy,” said Brian Mayfield, President and

Heerbrugg,Switzerland, May 30, 2013—Leica Geosystems, the leading manufacturer of airborne mapping solutions, announces today that it has entered into a cooperation and distribution agreement with Aibotix, an innovative manufacturer of multicopter unmanned aerial systems (UAS) to create end-to-end solutions for the professional inspection and mapping market. Lightweight unmanned aerial multicopter systems such as the Aibotix 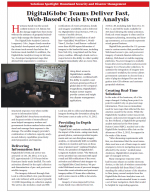 MANASSAS, Va., May 21, 20130—Aurora Flight Sciences was honored by the Small Business Administration with its Tibbetts Award which recognizes technological innovation made possible through the federal government's Small Business Innovation Research (SBIR) and Small Business Technology Transfer (STTR) programs. The award is named for Roland Tibbetts, who is acknowledged as the father of the

Norcross, Ga., May 24, 2013—In the wake of the devastating tornado that tore through Moore, Okla., and surrounding neighborhoods on May 20, the Oklahoma Society of Land Surveyors (OSLS) issued a request for its members to support relief efforts. Leica Geosystems quickly responded by sending in a monetary donation through its regional dealer in Texas,

Sheboygan, Wis., May 15, 2013—AeroMetric presented the St. Louis U.S. Army Corps of Engineers with special recognition including an inscribed award and project poster for "Creating an On Target Geospatial Foundation for the Navajo Housing Authority." The award and poster were duplicates of the ones that AeroMetric was honored with the at the MAPPS conference

Guildford, United Kingdom, May 14, 2013—Satellite imagery provided by DMCii is helping to plan the attempt to break the land speed record by the BLOODHOUND Project. BLOODHOUND product sponsor DMCii has provided regular imagery to monitor test track conditions on the Hakskeen Pan in the Northern Cape of South Africa. During the rainy season (from