As rebuilding efforts and military operations continue in Iraq and Afghanistan, the demand for high-quality terrain data has increased steadily. To meet the demand, the National Geospatial-Intelligence Agency (NGA) has incorporated the use of light detection and ranging (LiDAR) to provide high-resolution data directly to the warfighter.

Why LiDAR?
LiDAR produces high-resolution, 3-D terrain data, characterizing Earth’s surface with a level of detail unachievable by more common remote sensing devices. The technology is an asset to geospatial analysis and assists in providing mission partners highly detailed products.
LiDAR is fundamentally similar to radar except it uses light pulses to find the range and intensity of an object instead of radio waves. This light pulse reflects off trees, buildings and any other above-ground features before finally reaching the ground and returning to the aircraft where the range is calculated.
LiDAR data can be used to produce high-resolution 3-D models of Earth’s surface, typically 1 meter or better. Although academia and other research groups have used the technology for decades, it’s just now finding its niche within NGA. 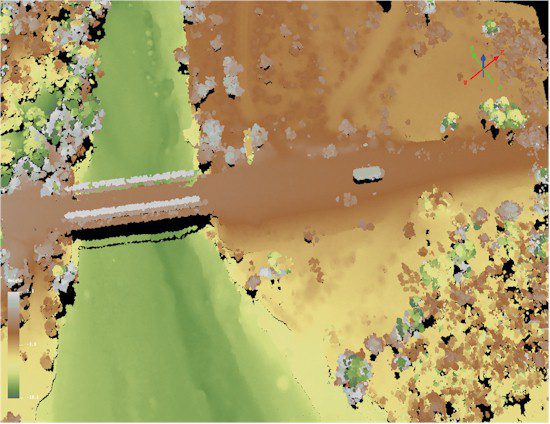 Figure A. In this LiDAR image, elevation coordinates are broken into a discrete number of intervals. Points that fall within a particular interval are assigned a unique color, resulting in a false-color visualization of the data. 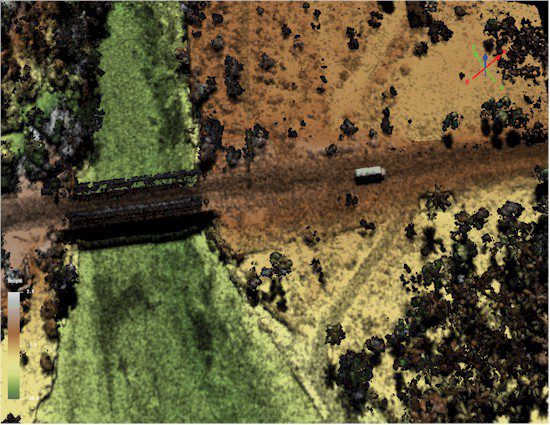 Figure B. In addition to the 3-D data, it’s possible to calculate a relative reflectance value that provides information concerning the reflectivity of the scene contents at the system’s laser wavelength. In this image, hues of the colors in Figure A were scaled according to the relative reflectance, resulting in a product richer in information. 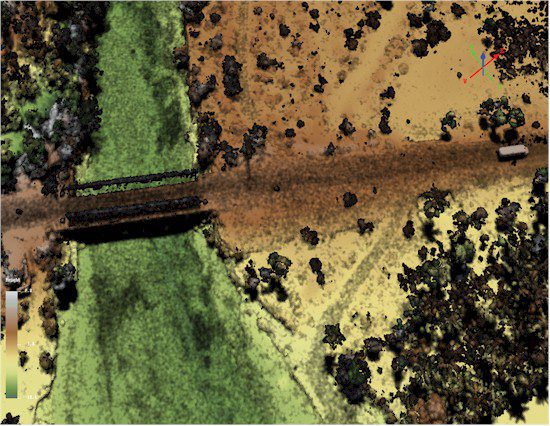 Figure C. Some laser radar systems can perform multiple sequential scans over a scene of interest,

To date, LiDAR has been used predominately to automatically generate digital terrain models and digital elevation models (DEMs). LiDAR-derived DEMs are manipulated easily and have a higher resolution, offering many advantages compared with other topographic surveying methods. The amount of detail results in greater precision, which is essential for creating products for the warfighter.
Different LiDAR sensors may be used, depending on project objectives. Bathymetric, topographic and atmospheric LiDAR sensors gather data using different regions of the spectrum. Typically, topographic LiDAR sensors are mounted on an aircraft platform for an aerial view of the collection area. Mobile LiDAR sensors are mounted on vehicles to provide 3-D street views, and terrestrial sensors are mounted on a tripod for a high-resolution, stationary collect. The processed data commonly are referred to as a point cloud, which comprises millions of individual points that have an x, y (latitude and longitude) and z (elevation) value. These points represent all objects on or above Earth’s surface, including the surface itself.
Some airborne LiDAR sensors can image in two different modes: target and mapping. In target mode, the sensor continually focuses on a target while the aircraft flies over, saturating with laser pulses to generate a high-resolution product. Mapping mode is a form of wide-area collection where the laser scans back and forth along a set path to collect data of the intended area.

Exploiting LiDAR’s Full Capabilities
In addition to precise terrain models, the unique characteristics of LiDAR data allow for a wide array of analytical capabilities to be used, such as change detection, line-of-sight analysis, foliage penetration and site characterization. Research now is being conducted on using LiDAR to perform automated feature extractions, 3-D urban modeling and vertical obstruction analysis.
Perhaps one of LiDAR’s most promising applications is foliage penetration—the ability to locate objects under tree canopies. During this process, the laser pulses pass between gaps in the foliage, just as light would pass between your fingers if you were holding a flashlight above your hand. The light then reflects back through the gaps to the sensor, recording a point.

Though still being developed within private industry, semi-automated feature extraction will be another advantage of LiDAR, which allows objects in a scene to be categorized based on their size and shape in a master catalogue. Vegetation, buildings and roads are among the categories being considered for inclusion. Once identified, features can be displayed as either 2-D shapefiles or, in some cases, 3-D features.
Whether it’s for a basic elevation model or 3-D feature extraction, LiDAR is becoming a primary source of high-resolution terrain data at NGA. As the technology matures and improves, scientists are pushing the boundaries of LiDAR and passing their knowledge and experience to analysts. Along the way, analysts can expect more high-resolution LiDAR data to be available to support their mission needs.