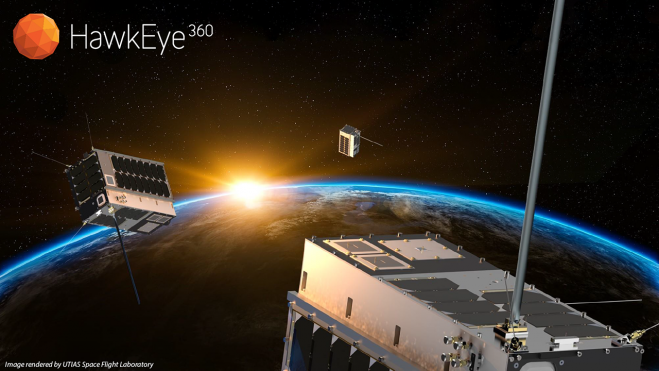 Small satellite technology has ignited a revolution in Earth observation, enabling the launches of hundreds of imaging platforms into orbit in just the past few years. A U.S. firm is leveraging this microspace technology and its paradigm-shifting economics to introduce an entirely new kind of mapping – radio frequency (RF) signal geolocation – to the commercial geospatial industry. 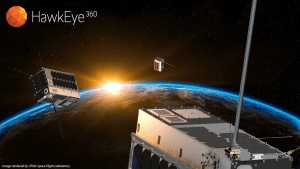 In December 2018, HawkEye 360 Inc. of Herndon, Va., made history by launching a cluster of three formation-flying microsatellites from Vandenberg Air Force Base in California. By early 2019 these demonstration satellites, dubbed Pathfinder, were fully operational and had successfully detected and located a range of RF signal sources on the Earth below, confirming the viability of space-based geolocation.

HawkEye 360 is deploying a commercial constellation comprised of multiple three-satellite clusters to achieve a nearly persistent global RF mapping capability. The geolocating microsatellites, along with advanced RF data analytics developed by the company, will serve a variety of commercial applications such as maritime ship tracking, communications spectrum analysis, and emergency response.

“We are generating an entirely new data source for important commercial, defense, and intelligence applications around the world,” said HawkEye 360 CEO John Serafini.

After the successful commissioning of the Pathfinder demonstration satellites, HawkEye 360 announced it had awarded the prime contract for development of the second cluster of three microsatellites to Space Flight Laboratory (SFL) of Toronto, Canada. Previously serving as a major subcontractor, SFL also built and integrated the Pathfinder microsatellite buses now in orbit.

SFL’s role in the HawkEye 360 team is significant because the Toronto specialty aerospace lab was instrumental in developing the advanced yet affordable attitude and formation control technology that keeps nano- and microsatellites precisely pointed and positioned in Earth orbit. This compact, low-cost technology, first proven in the 2014 Canadian CanX-4/CanX-5 mission, enables precise formation flying by the Pathfinder cluster of three microsatellites.

The key to pinpointing the geographic locations of RF signals coming from sources on the Earth by a three-satellite cluster in orbit through a form of triangulation is the precision of the formation, explained HawkEye 360 Founder and Chief Technology Officer Chris DeMay. The microsatellites each detect the RF signals, and positions of the satellites relative to one another must be known for the geolocation determination to be accurate.

With the Pathfinder microsatellites fully operational and the second cluster under development, HawkEye 360 is rolling out a series of products and services based on the geolocation and analysis of RF signal data being collected now.

Maritime Domain Awareness – Marine vessels at sea use a technology called AIS (Automatic Identification System) to electronically broadcast their locations and other information about their ships. Numerous services exist to track vessel movement by their AIS signals, however, these broadcasts can be ‘spoofed’ to provide incorrect information, including location details. 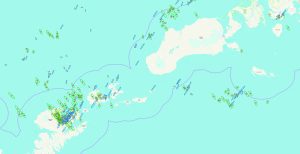 Nefarious AIS signals are transmitted by ships involved in illegal fishing, drug smuggling, human trafficking, and illicit petroleum transfers. Vessels hijacked by pirates often spoof their AIS location data too. Differentiating accurate ship location details from counterfeits has become a necessity in recent years as illegal activities on the open seas have flourished. HawkEye 360, however, has a solution.

“We are able to independently detect and verify the locations of ships,” said DeMay. “Our satellites can see those same AIS signals…and through formation flying pinpoint where they are actually coming from and determine if there is a disparity with where the signal says it is.”

Spectrum Analysis – The overall goal of spectrum analysis is to improve the resiliency and operational efficiency of communication systems around the world, explained DeMay. One of the main ways the company will accomplish this is by geolocating and mapping RF signal sources to identify interference, a growing problem as wireless and satellite communications networks expand.

“Our offering is to geolocate signals and determine patterns of behavior by interfering signals,” said DeMay, stressing that most interference is merely the result of overcrowded frequencies or misconfigured networks, while some may be intentional jamming by bad actors.

These location units, however, can be damaged in a crash or incapable of receiving signals from orbiting GPS satellites in mountainous or heavily wooded terrain. As with the AIS signals, the HawkEye 360 microsatellites will pinpoint the emergency beacon transmission itself to locate its source, quickly guiding emergency personnel to the correct location.

Just weeks after their launch, the Pathfinder cluster successfully demonstrated the geolocation for an emergency position-indicating radio beacon (EPIRB) signal, a technology now being deployed in the marine industry to find individuals who have fallen overboard from ships or offshore oil rigs.

As part of its spectrum mapping service described above, the commercial firm plans to assist emergency first responders and government agencies understand the status of wireless communication in the wake of disasters. Major storms and other widespread catastrophic events can wipe out wireless telecommunications infrastructure, leaving major communication gaps that slow recovery efforts.

“HawkEye 360 will map spectrum utilization before and after such events to show emergency officials what has failed, so they and telecommunication companies can identify the most critical places to deploy backup equipment,” said DeMay.

Low-cost attitude and formation control technologies enable nano- and microsatellites to be utilized in commercial businesses like HawkEye 360’s and many others related to geospatial applications. Precise formation flight by multi-satellite constellations and remote sensing missions that require accurate pointing and relative position control, is of limited use unless the cost fits within commercial business models, explained SFL’s Dr. Zee.

Up until about 20 years ago, only large satellites could provide the attitude control accuracy and – by virtue of their large inertias – precision necessary for communication, imaging, and space astronomy. The exorbitant cost of these massive satellites put many applications out of reach for commercial business models.

From its inception in 1998 at the University of Toronto, SFL focused on delivering outstanding attitude control for smaller satellites. The specialty lab developed actuators and sensors and wrote software algorithms from scratch to provide fine control along multiple axes for satellite platforms with masses less than 100 kilograms.

This attitude control technology has provided the stability necessary for multiple successful space astronomy missions developed by SFL, as well as the pre-commercial GHGSat-D (aka “Claire”) atmospheric Earth observation microsatellite launched in 2016. The 15-kg Claire mission built by SFL for GHGSat Inc. must slew precisely in space to point its instrument toward ground targets for detection of greenhouse gas emissions. Such precise pointing can’t be achieved without a stable platform. 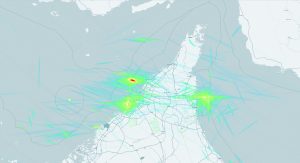 VHF signal density heatmap off the coast of Dubai and near the Strait of Hormuz. (Graphic courtesy HawkEye 360; Base map © OpenStreetMap contribution)

“Every mission requires unique attitude control,” said Zee. “We identify a combination of actuators and sensors that meet the particular pointing and stability requirements of a given mission, and rely on heritage algorithms, simulations and test approaches to realize a high performance, compact, yet low-cost attitude control system”

Top-notch control expertise at SFL also enabled the lab to make precise formation flight a reality with nano- and microsatellites. This solution integrates custom software with three onboard hardware systems – propulsion, differential GPS, and an intersatellite link – to keep the satellites in their intended relative orbits with a predefined baseline separation among them.

This formation flying technology developed by SFL and demonstrated in the earlier CanX-4/CanX-5 nanosatellite mission were crucial in the Toronto laboratory’s selection for the Hawkeye 360 team. SFL believes low-cost, precise formation flight will be a key capability not just for geolocation but for many next-gen Earth observation missions moving forward.

The economics of smaller satellites make constellations more appealing in some cases, explained Zee. Moreover, in appropriate cases, choosing architectures using multiple smaller satellites working together fosters linear cost scaling in lieu of the exponential cost growth that would be seen by implementing the mission on a single large satellite. The use of many satellites offers better coverage and natural redundancy that dramatically boost the likelihood of long-term mission success.

“The economics of viable microspace technologies are enabling commercial remote sensing applications, like HawkEye 360’s and many others, that simply weren’t practical a decade ago,” said Zee.

For 26 years, Kevin Corbley has been one of the geospatial industry’s foremost experts on satellite remote sensing. He has authored more than 750 feature articles on geospatial topics and frequently speaks at conferences. Kevin is based in Colorado and may be reached through www.corbleycommunications.com.