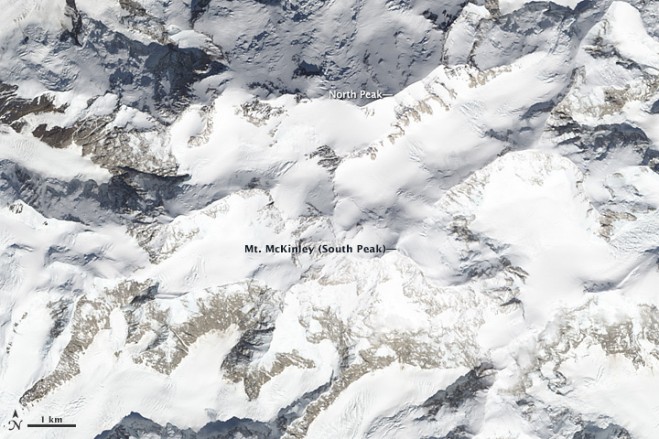 The Operational Land Imager on the Landsat 8 satellite captured this image of Denali, or Mt. McKinley, on June 16, 2013. The mountain, composed primarily of granite, is located in the heart of the Alaska Range and has two significant summits that rise above the Denali Fault. The South Peak is the taller of the two.

Yet contrary to some reports, the mountain isn’t shrinking. In fact, Denali is growing by about 1 millimeter (.04 inches) per year due to the ongoing collision of the Pacific and North American plates. The newly circulated elevation number says as much about differences in measuring techniques as it does about the mountain’s actual height.

The renewed interest in Denali’s height stemmed from an update to the National Elevation Dataset released by USGS in August 2013. The dataset, the agency’s primary elevation product, is updated every few months as new elevation data become available.

In 2013, USGS and partners, including the state of Alaska, added 5-meter InSAR data into the National Elevation Dataset. The new data, which aircraft collected over large portions of Alaska in 2010, was fed into a digital elevation model that calculated Denali’s maximum elevation as 20,237 feet (6,168 meters).

It is tempting to compare this number to an earlier measurement of Denali’s height. In 1952, USGS records indicate that surveyors climbed the mountain and concluded its highest point was 20,320 feet (6,193 meters). But that is an apples-to-oranges comparison, USGS cartographer Kari Craun explained to National Geographic.

The airborne InSAR data report the average height for a 269-square-foot (25-square-meter) area around the summit—not Denali’s highest point. Unlike the 1952 measurements, the more recent measurements weren’t intended to provide an extremely accurate measurement from the summit, according to Craun.